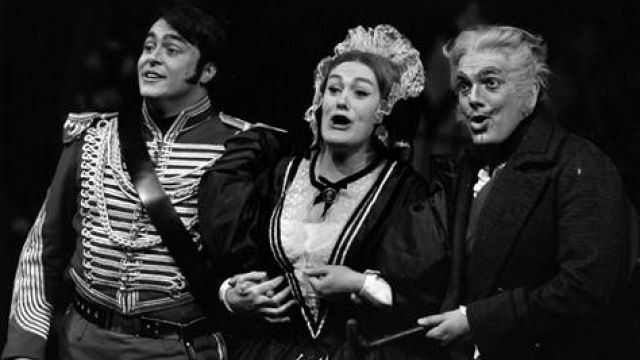 Tributes are flowing in from around the world for Australia’s greatest Opera singer Dame Joan Sutherland.
Dame Joan, known as La Stupenda, has died at the age of 83 at her home in Switzerland after a long illness.
New Zealand diva Dame Kiri Te Kanawa said Dame Joan could never be equalled.
"She's totally unique and you will never ever hear another voice like that," Dame Kiri told ABC Radio.
"I certainly haven't heard one like that in the last 40 years.
"It was elite, it was supreme, no one could ever reach that. We've all tried but I think with a lot of us it failed.
"Just listening to the articulation, the ... athletics of the throat, she was just amazing."
Dame Kiri, who appeared many times on the opera stage with Dame Joan, said she was in another league.
She also had high praise for Dame Joan as a person.
"Everything about her was generous and lovely, there's not a single thing that you can say that Joan lost her temper, or had a bad moment," she said.
"It's a sad, sad loss."
Opera Australia artistic director Lyndon Terracini said the soprano had a great presence.
"She was tremendously down to earth and tremendously joyous to be with," Mr Terracini also told ABC Radio.
"When she came into the rehearsal room the whole place would light up and I think in performances that joy communicated from the stage to an audience in quite an extraordinary.
"It was a unique quality she had, apart from the fact that she had a phenomenal instrument and a phenomenal technique to be able to deliver the performances she did."
Dame Joan, who made her name in the UK, along with her conductor husband Richard Bonynge, had done much for opera in Australia, Mr Terracini said.
On their return to Australia their opera company had given many others opportunities, and in her role as Opera Australia music director Dame Joan had boosted the art's profile.
"I think she transcended not only the operatic form but was a great communicator to the wider public," Mr Terracini said.
"I think it would be fair to say she was Bradmanesque."

Dame Joan Sutherland was born on November 7, 1926 in the Sydney suburb of Point Piper, Australia. The daughter of a fine mezzo soprano and master tailor, her formal education began at St Catherine’s Church of England School for Girls in Waverley. During those years, she studied piano and constantly listened to her mother Muriel Sutherland practising.
She performed regularly in concerts, oratorios and broadcasts throughout Australia and for the Affiliated Music Clubs of N.S.W. often being accompanied by Richard Bonynge. In August 1947, she made a significant debut in a concert performance as Purcell's Dido before giving up her secretarial job in 1949 to concentrate on her singing.
That same year, Dame Joan won the prestigious Sun Aria competition followed by the Mobil Quest in 1950. In April 1951, a Testimonial Farewell Concert was held to raise money for her in the Sydney Town Hall followed by her first staged operatic role - the title role in the world premiere performances of Eugene Goosens' opera Judith at the N.S.W. Conservatorium of Music in Sydney conducted by the composer.
In July of that year, at the age of 24, Joan Sutherland, with dreams of singing at Covent Garden, sailed with her mother from Sydney on the Maloja to London. Once settled, she met up with Richard Bonynge who was already studying piano there. She auditioned for Clive Carey of the Royal College of Music and was immediately asked to join the Opera School. From here on she studied all her roles with Richard Bonynge.
In 1952, she performed the role of Giorgetta in Puccini’s Il Tabarro for the RCM. Then after 3 separate auditions, she was invited to become a member of the company of the Royal Opera House Covent Garden making her debut as the First Lady in Mozart’s The Magic Flute on 28th October 1952. In the November of 1952, she sang the High Priestess in Aida with Sir John Barbirolli conducting (and later the title role with the same conductor) and soon after, the small role of Clotilde, alongside Maria Callas as Norma and Ebe Stignani as Adalgisa. Following this she performed her first leading role at Covent Garden that December, Amelia in Un ballo in maschera.