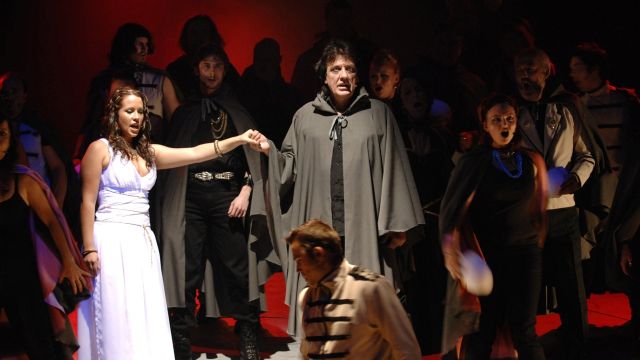 My fondest memory of Jon English was sitting in his front garden in Rozelle as he strummed out on the guitar a song from the musical Paris he wrote with David Mackay.

No matter how worse for wear he was, he could always switch back on his extraordinary talent as a performer, to recall lyrics he had penned decades past.

Jon called me the world’s biggest nag. I nagged him (politely) and others to release the rights to Paris. Jon and two of his partners had spent a fortune releasing a concept album in 1990 and I lobbied them to release the amateur rights.

And so in 2003 we had a simultaneous World Premiere; one production in the Rockdale Town Hall, the other in the Laycock Street Theatre Gosford.

Jon was as pleased as punch to finally see his baby on stage.

The idea for the musical was planted by his father. He brought young Jon up on the tales of Homer’s Illiad.

Jon crafted the musical from the perspective of Paris – the Prince who risked everything for the love of a woman (Helen) and plunged his nation into a ten year war.

The concept album had superstars on it and sold tens of thousands of copies.

Sadly no major professional producer picked it up. That is where I came in and had the music published.

In 2008 I took the plunge and produced a season of Paris myself at the Laycock Street Theatre in Gosford.

With the help of Director Stuart Smith we convinced Jon to play one of the roles. He appeared as Menelaus the wounded King who lost his wife.

It was hard work being a producer. The first draft of the set was dangerous.  It was based on a large wooden semi circle with steps.  It was quite steep and Jon almost fell off it during a rehearsal.

We realised that the ropes in the theatre were not strong enough to hold it up. There was a real risk of someone being beheaded.

Stuart came up with a brilliant idea. Let’s make the Trojan Horse like a venetian blind – which could be carried on.

Off to the hardware shop I went to buy the wood.

Jon English performed brilliantly as Menelaus and the season almost sold out. Fans came from all over Australia to see him. His partner told me how much he enjoyed the experience.

Since Paris was made available for performance in 2003 there have been more than 25 productions in Australia, New Zealand, England, Austria and Germany (yes it has been translated into German. I saw a production in Austria where they copied our set and choreography from Gosford as through we were the Broadway edition).

The next season is in Warragul this year and I am excited that in Utah, Brigham Young University Musical Theater is doing a reading in a few weeks which could lead to a full scale production in 2017.

All over the world the ‘Jon English’ edition of the Pirates of Penzance is performed every year.  Jon’s hijinks as the Pirate King swinging out over the audience on a rope is one of the highlights of the updated version of the operetta conceived by Simon Gallaher.

There never will be another Pirate King like him.