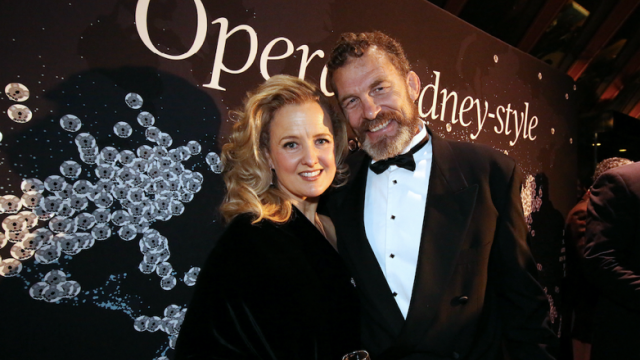 Multi award-winning Australian music theatre and opera star Taryn Fiebig, who made Prince Charles cry with her artistry, passed away in Sydney on March 20, 2021 from ovarian cancer, aged 49.  An outstanding human being, cherished colleague and sublime artist, has left the party.

Taryn led the cello section of the Australian Youth Orchestra in her teens and graduated from the University of Western Australia with aspirations to be a professional instrumentalist and teacher, whilst stealing the show night after night in university plays, operas and musicals with her vivacious wit, comedic panache and increasingly powerful singing voice.

Scholarships from Arts Western Australia and a Fellowship from the Winston Churchill Memorial Trusts enabled Taryn to study in the UK with Emma Kirkby, Evelyn Tubb and Jane Manning; while a two-year stint at the Australian Opera Studio honed Taryn’s stamina and stagecraft, making her an artist of rare grit, versatility, humour and strength.

She emerged from her training a golden-haired soprano with light step, devastating dramatic skills and a voice cut and set like a brilliant gem.

Just 12-months later, she was invited to become a Principal Soprano with the company where her lithe voice and youthful charm were deployed to numerous and varied roles including Zerlina in Don Giovanni, Mabel in The Pirates of Penzance, Clorinda in Cenerentola, Musetta in La Bohème, Servilia in La Clemenza di Tito, Oscar in Un ballo in maschera, Clorinda in Cenerentola, Lisa in La sonnambula, Belinda in Dido and Aeneas, Aphrodite in The Love of the Nightingale, Karolka in Jenufa, The Woodbird and Gutrune in Der Ring des Nibelungen, and Lucy Joy in Bliss, for which she took home her first Helpmann Award.

A committed performer, Taryn found intense satisfaction when encouraged to delve deeper into the psychological side of her characterisations of Susanna, Zerlina and Despina in Sir David McVicar's trio of Mozart productions (The Marriage of Figaro, Don Giovanni and Così fan tutte).

A musical theatre highlight for Taryn was over 200 performances as Eliza Dolittle in Opera Australia’s tour of My Fair Lady in 2008/9, playing opposite Richard E Grant as Professor Higgins, during which time Taryn’s ‘fur baby’ Malcolm Elizabeth Fiebig (a dachshund) was smuggled through many a stage door across New Zealand and Australia.

Meanwhile, Taryn’s international profile was growing and in 2010 she performed at the Edinburgh Festival (as Lucy Joy in Opera Australia’s production of Bliss), in the USA for the LA Ear Unit and in the UK with the English Chamber Orchestra and for BBC Radio 3 and 4.
After performing simultaneously as a cellist and soprano at Buckingham Palace in 2015, His Royal Highness The Prince of Wales was seen to wipe away tears and remark “I have never seen somebody play the cello and sing so divinely at the same time.”

In 2017 Taryn sang Musetta in La bohème for Opera Australia, Michal in Saul for the Adelaide Festival, major roles in Pinchgut Opera’s Triple Bill, and the title role in The Merry Widow for West Australian Opera. In concert she was a soloist with Sydney Philharmonia Choirs, Auckland Philharmonia and the Opera Australia Orchestra.

In December of 2017, Taryn was diagnosed with ovarian cancer and whilst undergoing rigorous treatment, continued to produce some of her best, most passionate and powerful performances.

In 2018 she returned to Opera Australia for Metamorphosis, earning her second Helpmann Award for her performance in the role of the Mother; and made major concert appearances at the Adelaide Festival and the Huntington Festival, and for Sydney Philharmonia Choirs and the West Australian Youth Orchestra.

In 2019 she performed in the role of Despina in Cosi fan tutte for Opera Australia; and as Selinda in Farnace for Pinchgut Opera, a company with whom she had a long association.

Taryn performed as a concert soloist with all the major Australian opera companies: the Australian Chamber Orchestra, Australian Brandenburg Orchestra and the Sydney, West Australian, Adelaide and Queensland Symphony Orchestras.

Taryn died at home in Elizabeth Bay NSW on Saturday March 20, 2021, surrounded by family and friends, and masses of soft pink roses.

This world has lost a glorious human.

I’m so grateful to have shared in her life.

I will miss her terribly, she was my everything.