Vampire and Obama Musicals in Austria and Germany 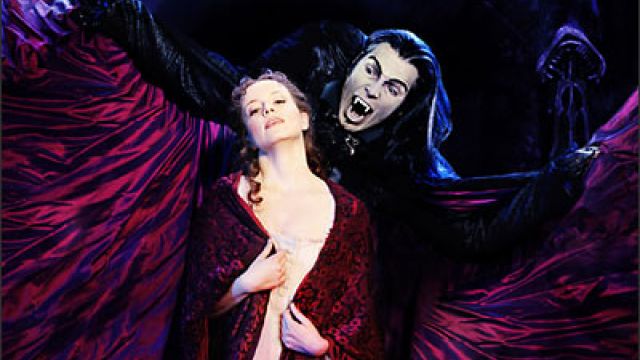 David Spicer had a spare afternoon in Vienna, but the Opera was booked out. Instead he had to fight for a ticket to Dance of the Vampire.

For well fed and watered theatre reviewers, used to turning up on opening nights with tickets to the after show party, it’s good every now and then to get into an old-fashioned ticket dust up.
It would have been appropriate for a bit of blood to be spilt, while lining up in the stand-by queue for the musical Dance of the Vampire.
The musical was a ghastly train wreck on Broadway, when Michael Crawford took charge of a re-write, but in German speaking countries it remains a blockbuster.
A young woman showed me her fangs, when it became apparent that as a paying customer I got preference over her student discount card in the fight for return tickets. Luckily we both got in.
Dance of the Vampire was very entertaining, if not high art. It’s based on Roman Polanski’s 1967 movie The Fearless Vampire Killers, or Pardon Me, But Your Teeth Are in My Neck.
There were moments of fright and comedy in equal doses. It had a lavish set and some spectacular dancing sequences.
The characters included a Vampire hunter, who looked distinctly like Albert Einstein, and his handsome young apprentice. They stumble upon an inn which houses an Orthodox Jewish family taking elaborate precautions, including the supply of copious amounts of garlic, to ward off an attack by pesky bloodsuckers on their beautiful daughter.
There was an evil vampire, the leader of the pack, and his white gay brother. Almost everyone gets bitten in the end and the show finishes with the mother of all vampire dance breaks.
For my liking there were far too many reprises of the song Total Eclipse of the Heart and a little too much fake blood was spilt.
But Dance of the Vampire has been running on and off since 1997 in German speaking countries
Closing on Broadway after 50 performances has had no impact in German speaking countries. The musical market in Germany and Austria can spin on its own orbit.

Another hot ticket is show is Ich War Noch Niemals in New York. This translates to I was Never even in New York. It’s a musical comedy set on a cruise ship, which uses the catalogue of Udo Jurgens.
Since opening in 2007 it has sold one million tickets.

In Berlin I attended a German western musical called Der Schuh des Manitu.
It was based on a series of novels by 19th century German author Karl May that have been compared to the Mel Brooks parody Blazing Saddles.
There were plenty of sight gags, which made up for the lack of sub-titles. It featured lively music and special effects. In Germany the use of video to portray scenic action is very popular.

But I was too late to miss one of the quirkier productions around.
In January came the world premiere of HOPE: Obama Musical Story. It’s said to feature music from pop, soul and rock styles. Based on the 2008 election campaign it featured a duet between Hilary Clinton and Barak Obama and a Sarah Palin ensemble with a group of scantily clad dancers.
At a try out in Frankfurt it got a standing ovation from the audience, but brickbats from critics. It re-opens in August in Hamburg.
In Germany the musical motto is yes we can.