Whipping Up the Fun in Chitty Chitty Bang Bang 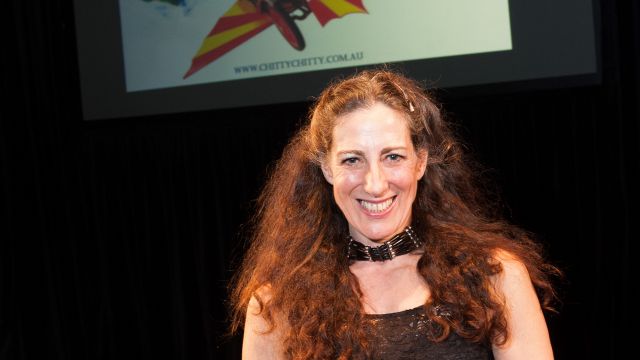 When the Australian production of the stage musical Chitty Chitty Bang Bang opens at Sydney’s Capitol Theatre, Jennifer Vuletic’s Baroness Bomburst will add the ‘naughty’ touches to this family entertainment. She spoke to Neil Litchfield.

STOP PRESS: Jennifer won the award for Best Actress in a Supporting Role on a Musical at the 2012 Sydney Theatre Awards.

As I sat in the stalls of Sydney’s Capitol Theatre with Jennifer Vuletic at the launch for Chitty Chitty Bang Bang, I asked what appeals to her about her character, the Baroness Bomburst.

“I think the Baroness and the Baron (Alan Brough) have license to do whatever they like in the show, because they’re two people who live in the country of Vulgaria, they don’t like children and in fact children are banished to the neverworld,” Jennifer told me. “My theory is that it means she can devote her whole life to him, and he can devote all his life to her. They’re a little bit narcissistic, and absorbed in themselves and each other, and I think they truly do love each other.

“But of course into their world come Caractacus Pottsand Truly Scrumptiousto disrupt their cosy arrangement, around about the time of the Baron’s birthday, for which, of course, she has made, extensive preparations.

In the movie, the part of the Baroness is a small one, but it’s been expanded substantially in the stage version.

“They’re kind of planted all through the play so you get to know them a lot earlier, and they’re far more intrinsic to the story in the stage production,” Jennifer told me. “The other thing is that their humour operates at a far more adult level. We’re the ‘Adults Only’ section, so we make all sorts of undercover jokes, and I think they have a pretty racy relationship too. There’s a tad of bondage and S & M. It’s not only children who enjoy fun in the dungeons.”

Kids are pretty knowing about those sort of things too, , though, I suggested?

“Possibly these days it’s going to be harder to get away with, but we’ll see how discreet we can be with it.”

Does the humour of the Baron and Baroness work on a different level for the kids as well?

“I think for the kids it’s far more about the magic of the piece; that there’s this faraway land with an inventor at the core of it, who makes all these crazy things which don’t really work, until he finally hits upon the whistles that make him a gazillionaire. But with the creation of the car, that’s when the flights of fancy really take over. I think that’s what appeals to kids, though it’s so long since I’ve been a child that I’m not really qualified to say. But from the children I know, I think that’s the element that actually appeals to them. But I think they’re actually going to love the Baron and Baroness, because there’s quite a few laughs to be had at the child level as well – just the sheer physicality of it, and the naughtiness we get up to.”

What particular qualities do you think you’ll bring to the Baroness?

My vast range of experience in the bondage discipline world,” Jennifer said, laughing. My whips chains and spurs.

“I’m really looking forward to having a laugh with Alan because he’s exactly on the same page as I am. The other thing which I think works in our favour with children is that we’re big kids as well – in particular the Baron. He’s really just a big kid, and I think she’s pretty much the brains of the outfit. She can play that game, but I think she’s the one who wields the whips. When the handcuffs come out, she puts them on him rather than the other way round.”

And what makes Alan right for the role of the Baron?

There’s a kind of child-like thing about Alan that’s really lovely, and a willingness to laugh. He’s a really funny man, as anyone who has ever watched Spicks and Specks will know. There might be something about the height too, that they’re mining - these two massively tall aliens from another country. What the costume designer does with us remains to be seen, but I would imagine there’s quite a lot to be mined from that with the two of us.”

Rehearsal Photos of The Bombie Samba'