A Zoom with a View 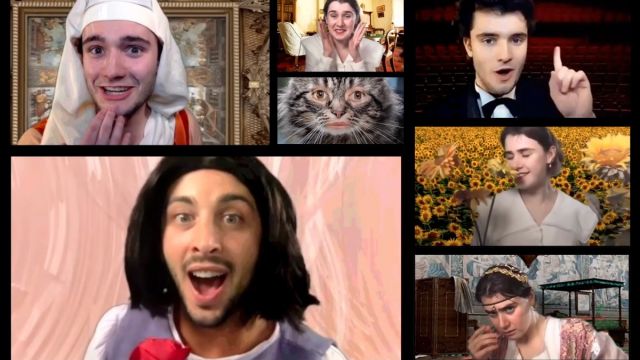 Image: A Pox on Both Your Houses - NIDA

In April 2020, at the beginning of Europe’s first catastrophic wave of COVID-19, Forced Entertainment produced an online performance parodying a Zoom meeting called End Meeting For All s. The avant-garde theatre company based in Sheffield, UK produced a three-part comedy described by The Guardian as a strange entertainment that saw participants talk over each other, manage poor connections and ugly angles, wander off screen to pick up a delivery and drink too much alcohol.

Digital productions seem totally antithetical to the core purpose of the theatre, which is essentially about the thrill of live performance in a shared physical space. This unexpected and unwelcome challenge has also been successfully taken up by Australian performers and the Zoom meeting has proved to be one of the most popular forums for this swift pivot to online productions. End Meeting For All#1 is very jaded in its view of the promise of streaming theatre, indulging in the despair and crudeness of online spheres.

However, several Australian experiments with digital technology and live theatre have shown that the notion of live performance is changing rapidly and radically in the era of COVID. Image: Who's your Bagdaddy? Or How I Started the Iraq War.

One of the more successful examples of this is the musical Who's your Bagdaddy? Or How I Started the Iraq War, directed by Neil Gooding and produced by Curveball Creative. Plans to bring the successful US musical to a Sydney stage were curtailed by COVID. As suggested by reviewers David Spicer and Coral Drouyn, it turned a pandemic disaster into a triumph and delivered a finely executed live performance that involved a carefully curated and synchronised livestream. The producer, Keith Muir, also believes that it was an opportunity to create an experience that could be described as superior to a traditional stage performance. Image: Who's your Bagdaddy? Or How I Started the Iraq War.

This production orchestrated nine individuals, each working in a separate room in the same house. It was all streamed via Zoom to a command centre which coordinated the broadcast to viewers. The rehearsals included some very finely tuned coordination of movement and performance to the camera and to fellow actors, executing some incredible precision timing. Muir felt that the production was fortunate, as the script and concept of the original show did lend itself to digital adaptation. The story of the musical involves nine people who are part of a therapy group dealing with the trauma of their involvement in the Iraq war. As virtual meetings are increasingly relying on Zoom during COVID, the transformation to a digital platform made perfect sense. The two-hour show was livestreamed each night for five nights in June and nothing was pre-recorded or edited, virtually replicating all the demands and thrills of watching a live theatre performance.

In the same month, Melbourne based theatre company La Mama also ventured into this virtual space with its children’s production of The Wholesome Hour by PO PO MO CO. The premise of this show involves a group of comedy performers who are trapped in a warehouse, possibly due to quarantine. The room is filled with props and costumes and they are unable to resist the temptation to create a performance which appears to be spontaneously improvised. Here the camera is as animated as the performers. The camera zooms in and out or jolts along with the kinetics of the performers, displaying an acute awareness of how to successfully combine film and live theatre. The performance was streamed on the La Mama Facebook page during August with great success. In June, Adelaide Repertory Theatre also explored ways of continuing to work under COVID and livestreamed their production of Rattling the Keys, a play by Zoe Muller. The recording of this hard-hitting show about the lives of five young adults living in poverty in remote Coober Pedy was then made available to view online. The online platform not only proved successful but was also clearly no obstacle to producing strong and moving performances. Another successful example of using online livestream was The Street Theatre in Canberra for their performance of a one-man show called St Nicholas by Conor McPherson. The clever use of tight close-ups and a camera that closely followed the performer, Craig Alexander, produced a new level of intimacy and proximity for the audience. Reviewer Beth Keehn noted that the way the staging techniques were adopted to accommodate the camera helped to create a very intense and palpable performance. State Theatre Company South Australia in conjunction with ActNow Theatre began work on their show Decameron 2.0. This is a series of recorded monologues inspired by the 14th century masterpiece by Bocaccio. The atmospheric shots, the raw lighting and locations including the use of backstage theatre spaces brings these performances to the forefront while clearly demarcating the virtual sphere as a theatrical one. The recordings are available on-line:

In August NIDA staged a digital theatre festival which involved six productions with different scheduled performances across seven days. As with other examples, NIDA’s experiments show that the digital platforms can successfully recreate the thrill of live theatre. The productions incorporated a variety of platforms including livestreaming on Youtube as well as Zoom broadcasts. While less technically equipped than a large-scale production such as Who’s Your Bagdaddy? the inventive ways the technology was woven into the productions made it clear that live performance could be just as stimulating and gripping in a digital sphere.

One of the productions was a livestreamed Zoom meeting between five fictitious acting students called Lockdown: Love and Death in the Age of Covid. The show, devised by the cast and company, was an amazing example of the way in which theatre can be written for this platform. The digital platform wasn’t just accommodating the drama and intrigue; it actually facilitated it. The rawness of the approach and the variety of ways in which the actors employed Zoom from different devices, including mobile phones while roving the streets, gave the performance an authenticity and relevance that is unique to the COVID era.

Image: A Pox on Both Your Houses

A Pox on Both Your Houses was a three part show loosely based on the star-crossed lovers in Romeo and Juliet. This was also performed over Zoom and although it appeared simple, the show actually involved over 250 video cues, 100 sound cues and operators viewing up to six screens at a time. Virtual backgrounds chat rooms, and emoji reactions were fully incorporated into the event to emphasise not only its live nature but also to give it an interactive element. The audience was invited to contribute sound effects and even replicate the menu that the characters had prepared for a virtual dinner date. One of the most inventive uses of the platform was placing the virtual audience into breakout rooms to have a post-show chat. This ingenious tactic made the event live, interactive and incredibly social. Image: A Pox on Both Your Houses - Tech Room

These examples are evidence of the enormous creative, technological and safety demands and challenges that must be met in order to transition the theatrical experience to online platforms. All of these shows also had to factor in social distancing and hygiene protocols imposed by COVID restrictions. The key to the success was to look beyond the stage or simply recording performances which could be viewed on a digital platform. Instead, these productions demonstrated the need to think beyond the traditional theatre venue, to embrace digital technology and to exploit different digital spheres. This ingenuity enabled them to establish new COVID safe pathways and opportunities to effectively continue producing engaging and exciting theatre.