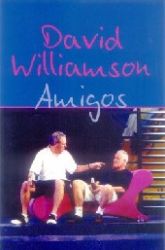 In a moment of glory at the 1968 Olympics, an Australian rowing team known as 'The Four Amigos' won bronze. It was lifetime bonding material.

Or so it seemed. Thirty-five years later only two of the Amigos keep in touch. Jim is a wealthy banker with a young, beautiful wife and seems to have it all. His friend Dick, a heart surgeon, has something that Jim covets: a sterling reputation. When the two mates meet up in Port Douglas with their wives, they have competing personal agendas. Then Steven, a third Amigo, turns up, ready to expose the past.

A savagely funny play that hinges on the subtle aggression and unacknowledged dependencies of male friendship — and the angst and irritation created for those on the sidelines.