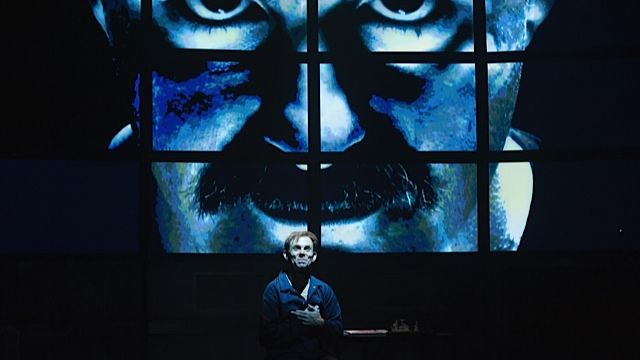 The task of taking any novel from the page to the stage – especially the touring stage – is never easy. To attempt to re-create the monstrous, oppressive regime of George Orwell’s 1984 would seem doubly daunting. Yet Queensland’s shake & stir company have done so brilliantly. This play is on tour across the eastern states during the next three months. You shouldn’t miss it!

Co-adaptors Nelle Lee and Nick Skubij have transferred every frightening nuance of Orwell’s bleak future into a very desolate third dimension. Director Michael Futcher and designers Josh McIntosh, Jason Glenwright (lighting) and Guy Webster (sound and composition) have captured this desolation in a vision that reaches into the audience even before the play begins. A constant spotlight roves above the waiting audience, fixing fleetingly, then moving on. Even the watchers are being watched.

Light fades. On a dim stage, overall-clad citizens watch a traitor confess his transgressions in loud, graphic, close-up detail on a giant wall of plasma screens – and stir each other to louder and more vicious screams of hate. It is a devastating beginning. Right from these very first moments, the dark, totalitarian society of Orwell’s vision becomes horrifically real.

These citizens are afraid, weakened by hunger and oppression. Hidden cameras track their every move. There is nowhere anyone can hide, no action that isn’t registered and recorded. Even as the history of their ‘empire’ is constantly being re-written, they are forbidden to question, just as they are forbidden to think – or to remember the past and how things used to be.

Winston Smith, however, does remember, and though he fears the Thought Police, he can’t, stop thinking and he wants to cling on to his memories – and perhaps even try to fight against Big Brother. Furtively, in the only place where he knows he is invisible to the cameras, he bravely records events in a hidden diary. As he writes, his worn, emaciated face fills the screen. If he’s caught …

Bryan Probets plays this haunted man with scary verisimilitude. His diminutive figure is dwarfed below the screens and the grey, decaying walls that surround him. His Winston is furtive, constantly alert, fearing others, yet longing to find someone else that might have the courage to shares his subversive thoughts.

His movements are hesitant, almost awkward, his voice edgy and strained.

At the end of the play, tortured and brainwashed, his anguished voice echoes in the darkened stage as he screams his final acceptance. Big Brother has won. The fact that Probets can return to the stage smiling at the end of such a harrowing performance says much for his artistic experience and preparation – and his physical stamina. 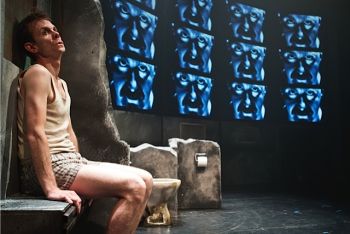 He is ably supported by Nelle Lee, Nick Skubij, Ross Balbuziente and David Whitney – all of whom bring a similar wealth of experience and concentrated talent to the production.

As Julia, Winston’s forbidden love, Lee is provocatively fearless, tempting fate in her relentless pursuit of love and black market symbols of the past.

Skubij and Babuziente play several roles. Of these Skubij is deceptively genuine as the antique dealer who tempts Winston and Julia into the bedroom above his shop, his seeming ordinariness hiding his sinister intent. Babuziente’s portrayal of Winston’s simple neighbour is almost heartbreaking. He’s open, friendly, seemingly uncomplicated and trusting, even when he is horribly betrayed by his seven-year-old daughter.

David Whitney brings all the strength of his broad experience to create the hateful role of O’Brien. He has a powerful stage presence and uses variation of voice and timing to create both the guile of the tempter and the horror of the torturer. The scenes of Winston’s torture are just as gruesome as the book describes – and his screams of pain quite terrifying. And Whitney’s O’Brien is immune to it all.

Together the cast and the designers’ handiwork  create the hopelessness of this frightening world – one that seems even more plausible today that it did in 1984! Ubiquitous CCTV, the ability to track mobile phones, hack emails, victimize and bully via social media may not be as oppressive as Orwell’s ‘empire’ but …

This is a powerful production. It will stay with me just as did the book when I read it so many years ago.