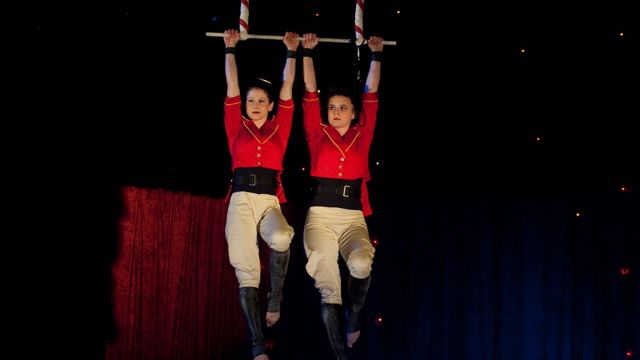 One of the most wonderful aspects of watching NICA's young Circus performers in their annual graduation showcase is the impressive wealth of talent and ability on show – just as one of the most awkward is when it all goes horribly wrong. What was highlighted in the dramatic juxtaposition between what worked and what didn't, was just how finite the magic of Circus is … and how complex it is for the artist: whose body, while often expressing a jaw-dropping powerful strength and fluidity, must also be finely tuned to apparatus, focus, mental and physical agility and a strict discipline that is marked by breaths … beats of fearlessness, inexorably linked with absolute skill, timing and precision.

Problematically for Circus in performance, is that the vocabulary is almost exclusively internal. What we have more invested in as audience is whether or not they will succeed in their breath-taking endeavours: such is the fascinating paradigm that has fuelled Circus as story, particularly in its cinematic incarnations where everything that can go wrong inevitably does. And therein lies the Drama. Watching Circus, we find ourselves – emotionally and intellectually – on the outside, looking in, resulting in a peculiar disengagement from what Circus aspires to offer as a communicative artform. This is one of the key elements of the success of companies like Cirque de Soleil: where individual and ensemble performances are ensconced in spectacularly grand traditions of story-telling and exceptional production values, taking on the aesthetic of Spectacle, where audiences are dazzled by scale, not intimacy. And without intimacy, there can be no real point of emotional engagement for an audience. Instead, we are dazzled by how death-defying it all is: yet if the trapeze artist doesn't plummet to the ground in a crumpled heap, we somehow feel as though it's all gone a little too much to plan. Why play with the distance you are from the ground if the very danger that is represented by that distance does not figure in our appreciation of the artform, and our respect for those who seek to master it?

There are several reasons you should see this showcase. Billie Wilson-Coffey's Tissu (aerial fabric) routine sets not only the pace, but the benchmark, for her fellow graduates, with an extraordinarily beautiful and fearless dance on the edge of physical impossibility. Hannah Cryle and Caroline Walsh's Duo Swinging Trapeze routine is sensational and also the most entertaining. Prancing about the stage as gorgeous show ponies, the pair then take to the trapeze (and the air) together and dance, swing, flip, entwine, release and unfurl themselves over each other in a routine of delightful flair, precision and comedic extravagance. Joshua Phillips and Idris Stanton's Circus Firemen are wonderfully entertaining, even if their vocal dialogue (as opposed to their shared physical vocabulary) seems to not yet be adequately incorporated into their routine. But it is Julian Aldag, whose Corde Lisse (Vertical Rope) routine who plays mercilessly with everything about the specific truths of Circus as an artform. Mr Aldag defies physics and (his and our) fear with a flawless and intricate performance of rare aesthetic beauty and power. His cascading pirouettes from the top of the rope to (very nearly) the bottom of it were simply spectacular … and everything before them and after them is perfection.

Beautifully supported by a marvellous setting, the fantastic Fanfare Band (made up of NICA's first year students lead with great spirit by Dr Kim Baston) and Mr Gorr's exquisite and precise lighting, the NICA graduates all obviously have wonderfully fulfilling creative journeys ahead of them. In the stunning National Circus Centre, it was difficult not to look up at some stage to watch the riggers (Margot Storm, Graeme Wheelan and Mark Bradford) scamper about the scaffolding ensuring that ropes, clips, counterweights and harnesses were all flawlessly incorporated … and delivered when necessary with pinpoint accuracy to the performers in a rare show of absolute (and critical) unity.

A fascinating evening. See it!