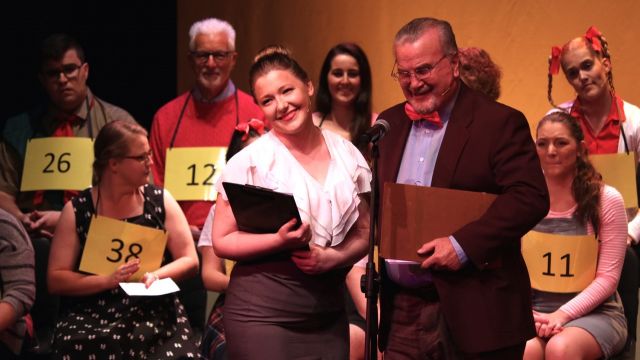 The 25th Annual Putnam County Spelling Beeis based on and original improvisational play called C-R-E-P-U-S-C-U-L-E that was performed by ‘The Farm’, a New York based group.  It is basically a staged spelling bee for early secondary schools students who are desperately competitive and fraught with angst and ambition.  Outside America it was first staged in Australia by Melbourne Theatre Company in 2006.

BAMS’ production is full of well-timed comedy.  It is so much fun to watch - a very polished and beautifully presented show that is surely great fun to be in.  This is probably partly due to the very real skill and experience of a number of its key talents.  Ian Maurice who plays Vice Principal Panch is truly a veteran performer with marvelous nuanced characterization and superb comic timing.  As Rona Lisa Peretti, Karen Mayfield is the perfect compere who sings like an angel.  And the music is played marvelously by a very slick band/quartet under the skillful guidance of Musical Director Christine Leah. Testament to Director Michael Skelton - this is an even-handed ‘well-oiled’ show.   Mr. Skelton is ably assisted by Kaitlyn Carlton in her role as Assistant Director.   Ms. Carlton is also the Choreographer, who uses a light whimsical touch that sees all performers looking confident and comfortable whenever dancing or moving in sync.

The cast is universally strong and there is a real sense of dedicated teamwork.  It is evident a great many hours of very focused work have gone into bringing this ‘fun evening at the theatre’ to Beaudesert audiences.

A number of locals from the audience are pre-designated to be spelling bee contestants.  This is an opportunity to incorporate local references and added laughs.

This show moves smoothly and very efficiently incorporates magic realism, to disclose the moving personal stories of contestants.  This is achieved through change of lighting, pace and style of acting and on all occasions’ works and is woven in seamlessly. All characters are beautifully developed and the young mostly obsessive contestants fleshed out with flair.  Skyah Fishpool portrays a fascinating dark little almost Goth adolescent Marcy Park.  The girl we all ultimately want to win - Olive Ostrovsky - is given just the right measure of humility and sensitivity by Katya Bryant.  Lauren Conway creates a grating brat character in her uptight Logainne Schwarzengrubenierre. Her two gay fathers, that is when they are not having a relationship crisis, dotingly focus on Logainne.  These dads are hysterical. Their self-obsessed antics and problematic fathering are convincingly explored by Connor Bryant and Jarryd Pianca.  Lachlan Clark’s Chip Tolentino fumbles along in a way that is very evocative of an awkward growing boy.  Daniel McNamara plays William Barfee, one of the most talented but quirky spellers, to a T - with marvelous focus and energy.  Then there is Carly Skelton who plays Leaf Coneybear a kind of dippy girl from a huge disinterested bordering on spiteful family.  Carly elicits heaps of laughs from the audience as she transforms from a scatty hard done by teenager to a spelling genius. Ensemble characters Sarah McNamara, Jordan Teese, Bec Teese, Jess Stone and Lesley McDonald all shine.

Stunning community theatre.  If you have been meaning to catch a BAMS show this is certainly one to make it to.