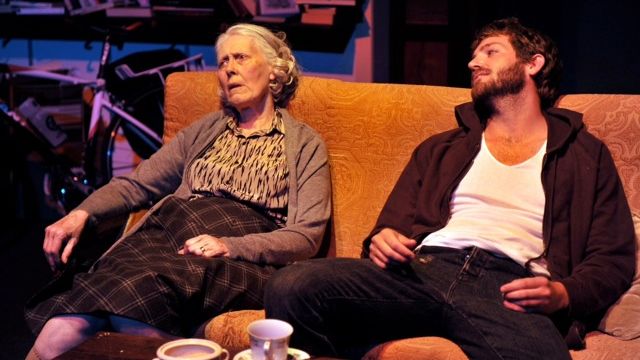 Any opportunity to see the sublime Julia Blake share her craft should not be missed by true theatre lovers.

In Amy Herzog’s play about the generation gap and the breakdown of family values, she plays Grandma Vera, an octogenarian who has no time for sugar-coating the truth or playing games (despite her unwillingness to be seen without her false teeth). When grandson Leo, a lost hippy soul in need of spiritual comfort, comes for an extended visit, the two find – in skipping a generation, they are more closely linked than parents and children; and each brings to the other a new understanding of the world as it is, and not as we would like it to be. It’s a touching and funny play, and beautifully measured entertainment.

Ms Blake has quietly asserted herself, particularly in her later years, as one of our finest stage actresses. She’s comfortable as Vera, and so in tune with the text that the words seem to be her own rather than part of a script. The scene where she gets high and talks about how men never satisfied her in bed is both poignant and hilarious. But, if we expect her to be every inch the consummate actor, it’s the rest of the cast that surprises and delights. Tim Ross is outstanding as Grandson Leo, a hippy lacking direction and an innocent who cannot face the loss of his best friend and his love. This is a young actor of great depth and emotional truth, and, when he clings to Grandma, it’s as if she represents a lifebuoy who will save him from the world. Through her, we see his growth from lost child to adult ready to take on the world. It’s a masterful performance, full of uncertainty and vulnerability, and he is a talent to follow carefully over the next few years. He’s already made his mark in previous Red Stitch productions and with MTC and his charm and lack of self-awareness make him a delight to watch. 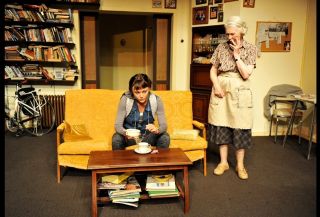 Ngaire Dawn Fair is beautifully cast as Bec, the girl who has grown up and left Leo behind. She plays the role with maturity but allows us glimpses of the girl Leo believed she would always be. In her farewell scene with him, we feel her regret without any sense of pity for the man-child she must walk away from. Haiha Le is a pocket dynamo; a diminutive girl in absurdly high heels which she teeters on, she dominates the stage (and Leo) as Amanda in her one long act 2 scene. She’s a powerhouse with good comic timing and gives us a perfect portrait of youth – a girl with an uncertain future living as fast as she can.

Mark Pritchard has taken these four talents and created a beautifully balanced production. Some of his choices are brave, for example backlighting the most moving scene in the play and letting Leo and Vera play out their awkwardness and pain in silhouette. It works brilliantly. He’s young, and not afraid of character and emotional diversity. Indeed, he seems to direct the emotion rather than the text so that the entire experience is more subtextual than it might have been. We can expect great work from him in the next decade.

With a totally believable and workable set by Sophie Woodward and lighting by Clare Springett – Red Stitch has delivered the perfect offering in 4,000 Miles. But isn’t that what we expect from them?