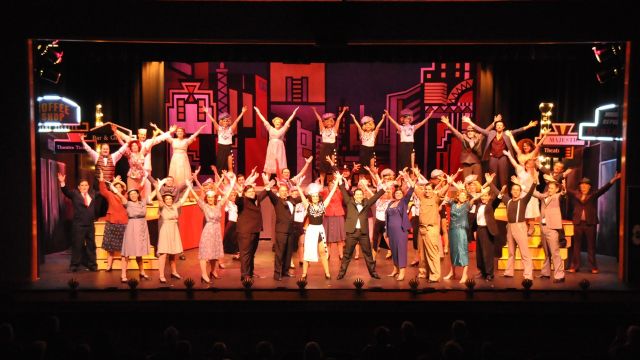 42nd Street is the quintessential backstage story; when the leading lady breaks her leg, a chorine replaces her and becomes a star. Based on the 1933 Warner Bros movie, the original stage production had a nine year Broadway run and was a tap-dancing extravaganza. Savoyards production gets an A in almost every department; a cast of fifty, splashy costumes, a set of top-rate principals, and a dazzling tap-dancing chorus of eighteen. Best performance was by Brad Rush as the show’s producer Julian Marsh. He was assured, totally believable, and sang well. Matching him was the equally talented Joanne Heath, who found the vulnerability and grit of the chorine Peggy Sawyer. Angela Clarke as the indisposed star Dorothy Brock landed her laughs, as did Julie Cullen and Andrew Scheiwe as the writers. Director/choreographer Sue Harvey’s tap routines were exhilarating, but her direction was frequently askew when she let upstage business shift focus from her precision-drilled chorus centre-stage. The orchestra, top-heavy with brass, handled the score well, but I could have done without the off-key trumpets. A little more scene-change and exit music wouldn’t have gone astray either. 42nd Street is not an easy show to stage, but kudos to Savoyards for pulling it off with such style.
Peter Pinne