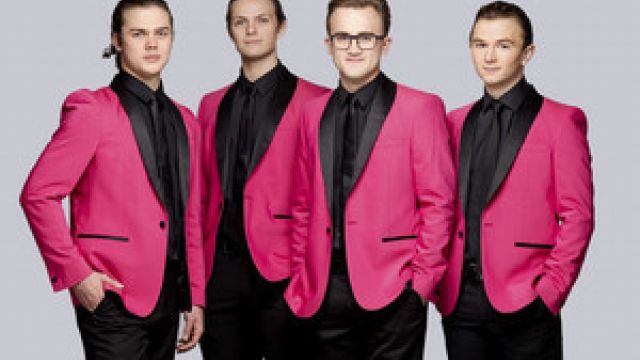 The 120+ minute tribute show presented by Adelaide’s 60’s tribute quartet, The 60 Four is a feast for the eyes and ears, and was enthusiastically embraced by a diverse age range of toe tapping, clapping music lovers. This show was loved by the ‘baby boomers’, but it is really a show for anyone who loves a beautifully presented, musically well-crafted and visually exciting tribute to some of music history’s greats.

A number of things impressed at the Las Vegas style showroom event. Significantly, the production values of this amazing group, originally school friends, are impeccable. Of note, is the beautifully balanced sound backing the performance, and the well-lit, simple stage. The four: Kyle, Finn, Lachlan and Ben (whose falsetto voice work is terrific) were so compelling that a simple stage, allowing them to sway, move, groove, sashay and strut, was a perfect foil for their timeless harmonizing and carefully balanced song delivery.  Significantly, whilst faithful to the original artists, these renditions very much had their 60 Four ‘stamp’.

Their choreography is tight, meaningful and engaging and a large number of audience members who could not resist dancing along, were delighted when the performers joined them as part of their routines.

Three simple costume changes ensured that they looked very much like they had stepped out of a 1960’s music clip and created the look that helped to ‘sell’ the songs.

All four have great theatre timing and excellent, well-placed audience eye contact that makes you feel like they are harmonizing and singing just for you.

These four young men, aged 18 to 22, began their singing at Scotch College when they were introduced to, and fell in love with the harmony style of a barbershop quartet. This ignited the spark to perform, and last night they performed 36 different songs from artists including Elvis Presley, The Four Seasons, The Beatles, Martha Reeves, The Beach Boys, The Supremes and Johnny O'Keefe. The songs are too numerous to list, but “What A Night” summed it up for me.

This group is appearing at five different venues during the Fringe with two of the group taking time away from their theatre studies courses. An event to look forward to is their final shows for the Fringe at Norwood Concert Hall where they will be backed by a live band. That will undoubtedly be a treat for the senses, and is recommended for anyone who loves well-presented music and a very theatrical show reminiscent of the legendary Frankie Vallie and the Four Seasons.