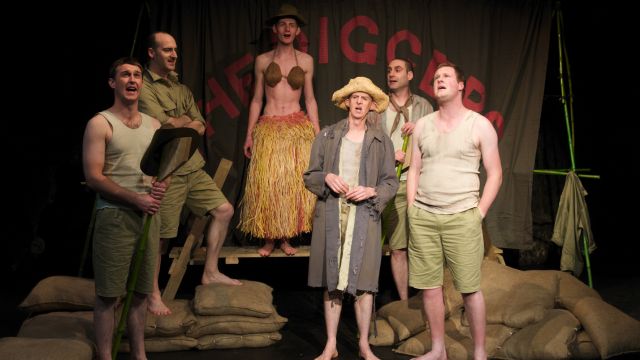 A Bright & Crimson Flower presented by Round Earth Company, written & directed by Richard Davey, is based on extensive research begun by Davey in the 1980’s. It is about the Australian POW experience in Singapore, Burma and at Changi: a play about courage, ingenuity, endurance and that often overused word “mate ship”. The stage representation of the POW’s is based around characters (some composites, some real) that formed the concert party. Music is a big part of the play, featuring songs selected by survivors. The importance of music, which helped to sustain the POW’s through the horrific, tortuous times of the three and half year ordeal, is essential to the play.
One of the features of A Bright & Crimson Flower, apart from the brilliance of translating such a large theme onto a stage, was the inclusion of authentic sound effects, and haunting visual and lighting effects. At each performance, a local choir accompanies the stage action and singing. At each regional event on the tour, a local choir will accompany the actors. This is an excellent opportunity for local involvement, and to bring Australian history to the nation.

“It is impossible to tell the whole story here. 22,000 Australian men and women were captured by the Japanese. About 14,000 survived. There are 22,000 stories to tell. "A Bright & Crimson Flower" may only tell a fragment of the whole, but we hope from that fragment that an audience can gain a hint of the breadth and complexity of the experience.”

The play uses 6 actors to tell the tale: the guise of the concert party is one way to express the POW’s voice. Excellent performances from Steven Jones, Don Bridges, Rick Mourant, Tim Priest Matt Wilson and Josh Gourlay were sustained throughout.

“1942 - 22,000 young Australians. We sent them to fight the Japanese.
They became Prisoners of War. They were made slaves.
One in three of them died. We brought back the survivors
and cheered them through the streets of Sydney.
We sent them home. - And we forgot about them”

In fact, the story has been suppressed. Successive Prime Ministers, after the war, felt that the story was too painful, too difficult, to tell. Sadly, many survivors have passed away before the truth can be revealed. Part of the proceeds from the tour will go towards the work of Legacy, including the attempt to have The 8th Division Memorial Book published.

This play was harrowing: it was also funny, sad, uplifting, tragic and brilliant. It was part of our history.
A Bright & Crimson Flower will be performed at thirty regional centres in Tasmania, Victoria, New South Wales and Queensland until the 25th September. See it!