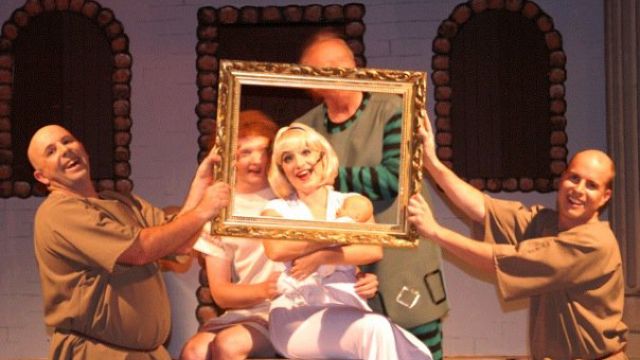 This farce-like musical, nicely executed under director Lars Jensen, was a great deal of fun.
While the cast was a little uneven in its skills, all were enthusiastic and the joy of performing was almost palpable. Ross Bryant played Pseudolus, the central role, with verve, and while I’d like to have seen a little more strength in Comedy Tonight, his energy kept the show running smoothly. Other mature performers included Phil Mackenzie and Diana Ryman, making a convincing bickering couple, Stuart Riches shining in his role which included a running gag, Harry Lenthall in a welcome return to the stage and Craig Menner as a gloriously unlikely warrior.
The juvenile leads were superb – leggy Emmet Nichols delighted the audience with his drag appearances, while Kimberley Harris and Morgan Phillips were lovable naïve young romantics.
The beautiful courtesans looked fantastic, and I strongly suspect that Vicki Kirkman’s leopard skin bikini is to blame for the medical evacuation from the audience on the night I went. The Proteans (Andrew Milne, Jeff Hanson and Warren McGrath) were a formidable team with excellent timing and great teamwork.
Music Director David Hardie worked nicely with a wide variety of vocal ability and his newly formed orchestra “Creatures of the Night” was an impressive team.
Lars Jensen employed a simple set design, with use of windows and doors lending much of the comedy. Costumes cheekily evoked the era and the stage work was smooth.
A great laugh and all had a good time.
Kimberley Shaw.