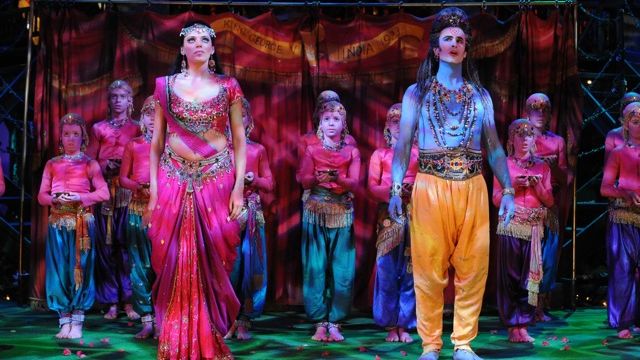 Opera Australia served up a visual banquet with this sumptuous performance that had all the hallmarks of a Bollywood extravaganza.
While A Midsummer Night’s Dream is short on dazzling tunes, this production is a feast for the eyes.
The set was an opulent Gazebo on three levels. In the middle sat the band in their British Raj finest, liberated from the famously cruel Opera Theatre pit. At the bottom was a cave and lake.
Set in India in the 1920’s, Director Baz Luhrmann and designer Catherine Martin tantalized the audience with shimmering light and gorgeous costumes.
The sweetest sounds came from Rachelle Durkin as Tytania the Queen of the Fairies.
Her tryst with an ass, when she was placed under a spell, was exquisitely funny. They floated off into the night, her legs wrapped around his grotesque hairy form.
All up there was more ham than you find in a delicatessen.
The Opera features a play within a play. It lampoons the traditions of Opera and takes a poke at the worst excesses of amateur theatre.
One of the men, wearing an ill-fitting wig, kept milking the jokes over and over. It didn’t matter how many times he repeated the same gag the audience loved it.
All up it was a wonderous night of entertainment, although following the plot required intense concentration.
What a blessed relief to have a sparkling opera with a happy ending.
David Spicer