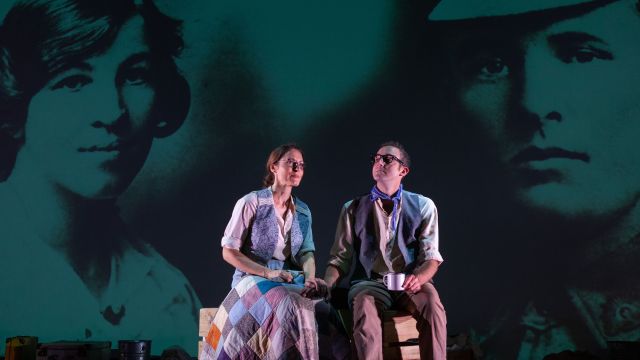 This World Premiere adaptation of AB Facey’s A Fortunate Life by Jenny Davis and Stuart Halusz by Theatre 180 and Cinemastage Productions is a new concept - immersive live theatre in a cinema, where a high quality live production is played against a filmed background.

Beautifully adapted by Jenny Davis and Stuart Halusz, this small cast retelling of A Fortunate Life fittingly makes its debut in Midland, the Perth suburb where author Albert Barnett Facey’s story came to an end.

The filmed background, expertly created by Green Man Media, brings both the exquisite beauty, and isolation and harshness of the Australian bush to life - adding elements that would not be possible in a conventional backdrop. The AV also uses maps, photographs, and animation to help bring layers to this very moving autobiographical story of life in Western Australia in the 20th century. Composition by Rom Siemiginowski and sound by Ben Collins are beautifully integrated into the action. Simply staged, the three actors - Michael Abercromby, Rebecca Davis and Benj D’Addario - play a myriad of characters as they retell Bert Facey’s story, from his first memories, through to old age. Beautifully acted, characters are brought to life with simple costume additions and props, and the transformations between characters - sometimes almost mid-sentence, are swift, convincing and always clear. There is outstanding synchrony between this trio and a wonderful sense of a share journey. Rebecca Davis’ and Michael Abercromby’s simple sharing of the role of Bert is particularly impressive, as is Benj D’Addario’s honest portrayal of Facey’s grandmother.

At times more light on the actors would have been nice, but the strong physical performances helped overcome the lower light.

A B Facey’s A Fortunate Life is moving and beautiful storytelling of a fascinating Australian story, and this unique approach makes for a captivating experience. A must see for those seeking new theatrical adventure, lovers of Australian history, those who love biography and anyone who appreciates a well performed story.