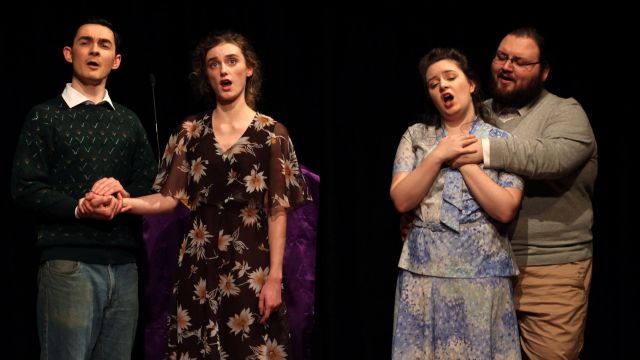 BK Opera continues to produce operas in a different light. In this case it was Mozart’s Die Entführung aus dem Serail transposed from the Middle East to the Bible Belt of America. So the Pasha becomes the leader of a cult.

So during the overture, the chorus sang a hymn and then the Pasha delivered a fire and brimstone sermon. The concept was quite clever, though there were some anomalies. I couldn’t follow the rationale of moving the action to America, having the sermon delivered in English and then the rest of the opera, both singing and dialogue, being in German. As in the original, the Pasha refuses to force himself onto Konstanze, but is happy to have her tortured.

One of the most difficult roles is that of Osmin, who should be a basso profundo. This role was given to mezzo-soprano Alison Lemoh. She has a beautiful voice, but didn’t capture the essence of the buffo bass. When Blonde upsets her, she looked mildly miffed, rather than mad as hell and a lot of the comedy of the piece was lost. I was pleased to hear considerable improvement in Stephen Carolane. With his expressive face, he would be more suitable for Pedrillo, and one generally looks for a warmer tone for Belmonte. His Konstanze was Belinda Dalton who handled the fierce tessitura of the role well. The two made a most convincing couple.

April Foster also had a lot of very high notes to negotiate as Blonde and did so with ease. Robin Czuchnowki could have made more of the comic character of Pedrillo. Aleksander Laupmaa was excellent in the non-singing role of the Pasha.

The direction was excellent. Konstanze’s main aria, “Marten aller Arten” has a long introduction and big breaks in the singing, and at no stage did it appear that she was waiting for the music as she was always given something to do. Pam Christie was excellent on the piano, easily skipping a couple of bars when one singer jumped in early.

This was an interesting take on an old warhorse.