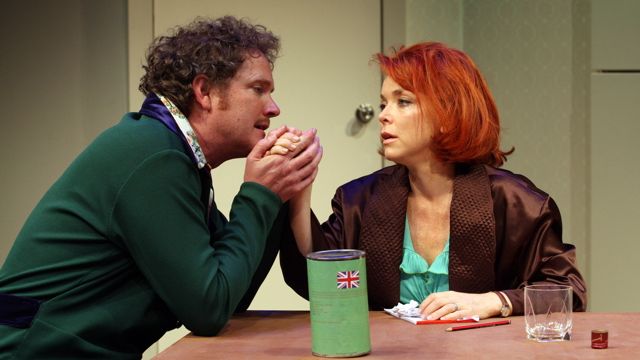 For its final production of the year the Ensemble Theatre have gone for a play from Sir Alan Ayckbourn's rich body of work, his 1972 comedy of social mores, Absurd Person Singular. This play is one of the most frequently performed plays in his repertoire.
Absurd Person Singular has given audiences plenty of joy over the years with its portrayal of the colourful interactions between three very different and fiercely competitive couples. They joust socially at each other’s houses, with the action centred inside their kitchens, over three consecutive Christmas Eves.
Ensemble audiences will enjoy the current revival directed by Andrew Doyle but it could have been stronger! The high points were Danielle Carter's, as Eva, poker faced portrayal of her bland suicide attempts in the second Act, Mark Owen- Taylor's flamboyant entrance as architect dandy, Geoffrey Jackson, Belinda Giblin's turn as the ageing beauty turned lush, Marion, and Barry Langrishe's energetic work as Ronald. Less impressive were Teo Gebert's unconvincing, hammy portrayal of Sidney Hopcroft and Octavia Barron-Martin could have done more with Jane.
Claire Moloney's set depicted the different worlds of the couples well. Jane and Sidney's ultra modern kitchen for the social climbers, Eva and Geoffrey’s messy kitchen reflecting Eva’s poor state of mind, and Marion and Ronald’s run down kitchen with its broken down heater and gas stove reflecting leaner times for the once affluent couple.
Andrew Doyle's production of Absurd Person Singular plays the Ensemble Theatre, Kirribilli until January 16, 2010.
David Kary