Accidental Death of An Anarchist 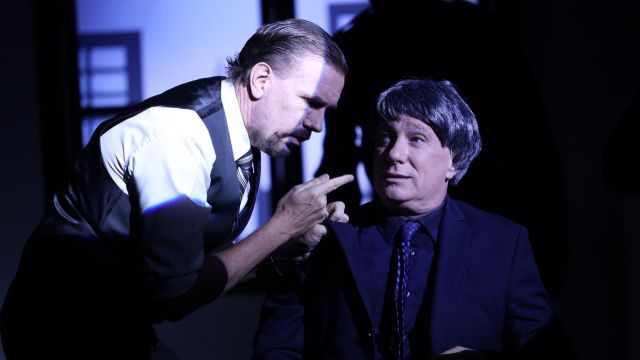 We are alerted to the fact that this is going to be a little different from the outset, with a dynamic angular set design by Peter Neaves (who also has the starring role) that shows that things are a little out of kilter. The black and white theming of the set is continued into the costuming, co-ordinated by Christine Gribble - with splashes of red including a fabulous pant-suit worn by the only female character. Effective lighting by Mark Ramsey and a supportive sound design by Gabriel Ferrari.

Frequently breaking the 4th wall, occasionally breaking character and being obviously and purposefully theatrical, this is stylistically very different, but the seemingly conservative matinee audience took this show in their stride and appeared to enjoy the change of pace.

Central character 'The Maniac’ is played by Peter Neaves in a bravura performance - and one he nails. This role allows us to see the duplicity and inconsistencies of most of the other characters, as posing as a magistrate (then other characters) he takes it upon himself to investigate the death of an anarchist that police claim was “accidental”. Great work from the team of police, all of whom nearly matched the manic energy of Peter Neaves and had great pace. Owen Phillips as Inspector Bartuzzo opened the show well, Lliam Gregory made a very impressive return to the stage after a long absence, David Gribble was strong as The Superintendent, while Dan Finn had great timing as The Constable in his first performance for KADS.

Virginia Moore-Price stood out in many positive ways, as the only female character - The Journalist Maria Feletti. There was a lovely “actor aside” about being the lone woman, which received applause - especially notable on International Women’s Day.

The efforts of a hard-working crew were noticeable with some quick changes and prop provision - good work from Stage Manager Christine Gribble and her stage hand Michael Watson.

A show with a famously ambiguous ending that leaves you thinking, Accidental Death of An Anarchist is a great conversation starter and will be appreciated by discerning theatre goer. A well directed, well performed and rewarding show.