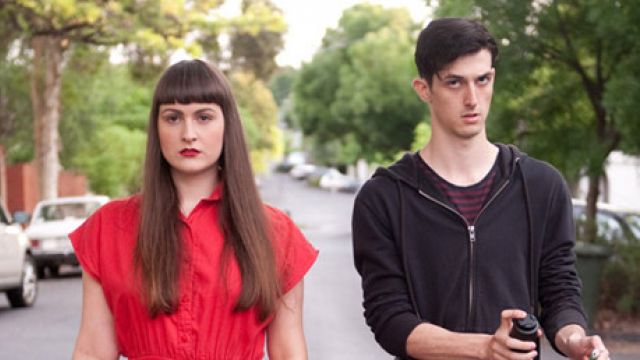 The stakes were too high for this opening night.  The Owl and the Pussycat have been extremely courageous in their recent offerings and MKA has just treated Melbourne audiences to a string of great productions.  So my expectations were high. So - what follows is an attempt to understand why and what this production is lacking.

The promo blurb says one thing and the play says something else.  Ambiguity can be intriguing, but the ambiguity couched in this work is confusing.  The inference in the promo material that the work is a response to the restrictive privilege of growing up in suburbia is not adequately substantiated.

Acidtongue and Dollfacecommences with an interrogation and a counseling session played in conjunction. This establishes a pervading dark tortured theme of self-loathing and punishment. We are introduced to the fact there has been a murder and thence the story works backwards and forwards illustrating characters and situations but not a clear motive or motives.  Something is missing and it is one of those tricky situations where it is difficult to tell exactly what it is.

Susan (Trelawney Edgar)is a teenage girl, whose mother (Kristina Benton)and father (Christian Hoegh)have separated.  She lives with her mother whom she is nasty towards and she has just started a new relationship with a lanky teenage boy named James. The two teenagers go on a midnight rampage in the burbs and James kills Susan’s mother – but why?  It is just not clear.

What is vividly illustrated in this production is the delusive state of Susan’s mother’s mind in respect to rekindling intimacy with her estranged husband and her self-loathing as she watches signs of aging take her body over.  Therefore her demise takes on the attributes of a sacrifice.  Unexpectedly this suggests the destruction of a middle-aged, self-loathing, delusional victim as the theme of the work, which could be partly due to the strength of Christina Benton’s portrayal of her.

Christopher Bryant has written some strong and poignant scenes that are entertainingly portrayed.  Two of these are memorably awkward minutes between Susan’s parents at the supermarket and a fabulous scene of using electronic media to communicate - when a simple conversation would suffice.  But the work does not flow as a whole, lingering unnecessarily on some interactions. It needs more/some substantial dramaturgical work, or the eye of a separate director to lift it out of blandness and confusion.  That is not to say it isn’t interesting and doesn’t have promise but it is not there yet.  It is way too introspective to be adequately dealing with the subject matter of murder, which suggests fear of the material.

Whether it was first night nerves, or not, Susan did not present as a normal teenager except in the video footage where Trelawney Edgarshone. There was way too much tension in this young actor’s opening performance to be convincing. She may be best suited to television acting and could focus her energies in that direction.  James Cerche was more believable as James - albeit a character lacking motives (as I am sure I have already said).  A more substantially filled-out, whole person is the character of Susan’s father, who did come across as your average bloke with some light and shade.

Awkward costume changes detracted from the atmosphere, which could be been better enhanced with more lights for the light design by Emily Keene.

Suburbia is ruled over by self-loathing matriarchs, that, if killed, become the haunting undead that will never let go – so there is no hope!  And maybe everyone should lighten up and turn this work into a comic horror play!

It is a really interesting production to think about, and I am glad I saw it, I think – but so difficult to write about!