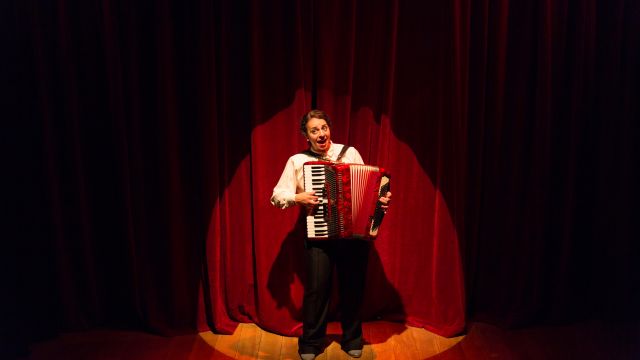 By The Scruff’s debut performance Act a Lady is a fast paced, gender-bending play-within-a-play.

Act a lady begins with Miles (Mason Gasowski), True (Spencer Scholz) and Caspar (Kashmir Sinnamon), from a Midwestern town in 1927, as they embark to put on a play in ‘fancy type, women type clothes’. Getting permission from Miles’ store-keeper wife Dorothy (Angela Lumicisi), for this unorthodox idea is their first hurdle. Dorothy, Act a Lady’s God police, wields her wooden spoon in protest as she reluctantly agrees, because the couple are putting their shop-keeping livelihood on the line for this morally ambiguous 18th century drag show.

Dorothy reminds us that “Art is when you think you see something but when it’s done you see something else” and Act a Lady delivers on this, taking the play-within-a-play convention to a challenging place. Miles, True and Casper are all looking for something the conservative town cannot provide and when Director Zina (Julie Anna-Evans) enters to direct their queer fundraiser, her Marlene Dietrich style is reminiscent of more progressive parts of the world in 1927 than the American mid-west.

One of the more challenging yet moving scenes has Casper gently place his head on his crush’s (True’s) shoulder. True seems to acknowledge the sentiment behind the sign of affection, however doesn’t respond in a homophobic way. True shares a saucy picture with Casper, a ‘coping strategy’ as living a closeted life in the town of Wattelburg is the only real option; the alternative would be to escape.

The 18th Century melodrama initially provides this escape for the townsfolk but curiously leads them back to face their fears and then challenge their ideas of reality. The female cast members discover the power in pants and Cass Bainbridge's Lorna – make-up artist to the stars - is wonderful.

Overall the entire cast performed well, with good direction. Act a Lady, a fast-paced journey exploring the fears behind rigid views on gender, is part of the Midsumma festival, celebrating queer culture.