Actor on a Box - The Dreaming - Wake Up Australia! 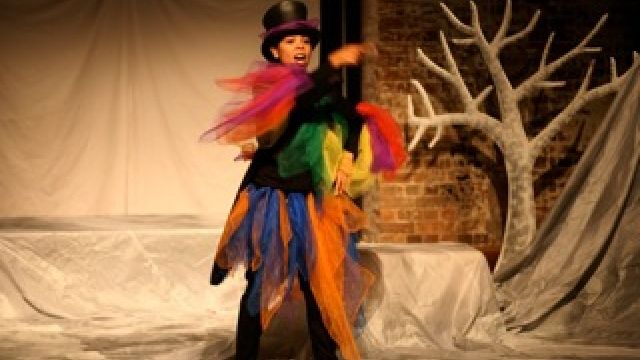 The latest production of STC’s Actor on a Box is theatre-in-education as it’s meant to be. And it’s presented in the best tradition of aboriginal story-telling – words and movement and music combining to re-tell Dreamtime stories as well as teaching a little about language and heritage. Based on stories told by her Grandfather, Mother, Uncle and Aunty, writer and director Leah Purcell has developed a “contemporised version … to make our stories accessible to our younger people and the wider community” without exploiting traditional and sacred ways. 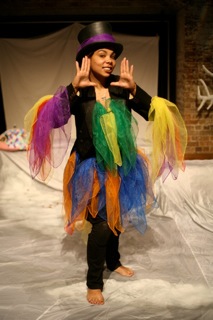 The first part of the performance is pure story telling. Through the character of Wahn, the colourful crow, and Mundagatta, the rainbow serpent, actor Angeline Penrith tells how the land was once cold and white and flat. At the beginning of the production, Penrith is resplendent, rising from the white covered set as the colourful Wahn, multi-coloured scarves flowing from her costume and her top hat and floating with her as she voice-synchs the beginning of the story and Wahn’s first song. More colour is added as she transforms to the rainbow serpent – a head mask with bright red lips and a long, wispy chiffon cape – and weaves through the audience. Eventually the sun’s face rises over the white sheets of the set, and sends its rays to warm the land and “Wake Up  Australia”. Wahn gives up her beautiful colours to the trees and flowers, and becomes the familiar black bird we all know. The song “Wake Up Australia” is foot-tappingly jaunty – and catchy enough for my almost-five-years -old companion to be singing on the way home!

The simplicity of the set for this part of the production – white tree cut outs and white fabric covering the acting space and strung with pegs from wire around its perimeter – is effectively stark to set the scene, and is easily removed for the second – more didactic, but certainly more interactive and just as entertaining – part of the production. Here Penrith ‘loses’ the character of Wahn and becomes herself, “Angeline, the Koori from Redfern”, deadly story teller and teacher. Firstly, using flash cards she revises and reinforces the aboriginal words for the birds and animals in the story, then teaches the audience their movements and leads them in dances. Young and older members of the audience are stepping out as dhinawahn the emu and scratching and hopping as marloo the kangaroo, or rising as the mountains and swaying as the trees. Everyone is involved and having fun – and learning! TIE at its best! 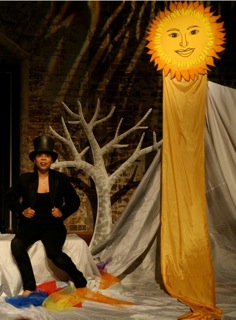 At the end of the performance, one of the sheets at the side is removed to reveal tables, a colouring activity and a wall where the children can leave their hand print ‘signature’ – another aspect of aboriginal culture that is cleverly taught through involvement.

All in all this latest production from Actor on a Box does everything Purcell outlines in her director’s comments. It is contemporary and accessible, yet still retains the essential nature of traditional aboriginal storytelling and dance. The juxtaposition from performance to teaching and interaction works most effectively and is accentuated by the decision to use a recording for the ‘performance’ part of the production. Penrith never falters in her lip-synchronisation and her movement and mime are beautifully controlled. As ‘herself’ in the second part of the production, she is relaxed and warm, reaching out to both young and old in the audience with her winning smile and ‘deadly’ encouragement.

Purcell has created a piece of theatre that is appealing and entertaining and educational – and Penrith’s versatility breathes life into it.