The Adventures of Peter Pan & Tinkerbell 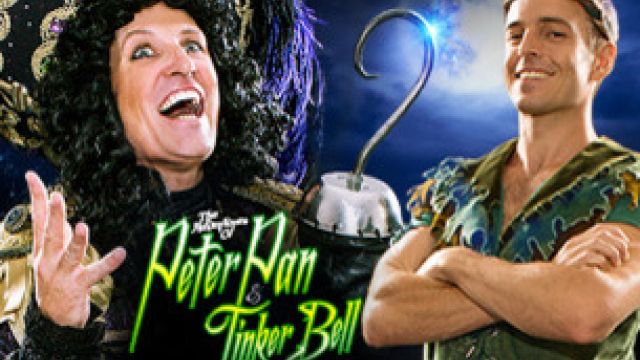 The old grandeur of the State Theatre is the perfect venue for this holiday time production, conjuring as it does the past theatre ‘glory’ of the old London theatres where ‘pantos’ still bring cheer to wintery London Christmases.

Slathered with all the buttery corn and slapstick of comedia, and some definitely questionable non-P-C jokes and add libbing, Bonnie Lythgoe’s production of Christopher Woods’ adaptation of J.M. Barrie’s story has the everything one expects of pantomime. There’s fun, colour, lights, singing, dancing … and lots of audience involvement led by the infectious talent of veteran British actor/comedian Kev Orkian as the pirate Smee.

From his first moments on the stage, Orkian has the audience in his very experienced hands, with children and adults alike responding to his jokes and asides. The consummate energy and enthusiasm he exudes sets the zany pace that is pantomime.

Tim Maddren as Peter Pan flies across the roofs of London to find his shadow and entrance the Darling family, while Jaime Hadwen as Tinkerbell-on-roller-skates sprinkles fairy dust to help them fly to Neverland. There they meet the Lost Boys, Princess Tiger Lilly (Robyn Loau) and Mimi the Mermaid (Katrina Retallick, who also doubles as the refined Mrs Darling) … and Peter’s sworn enemy, Captain Hook.

Todd McKenney is loads of fun as this typical farcical villain. He’s cheeky, mischievous, provocative – and not the least bit scary! Resplendent in velvet, gold brocade, black wig and feathered hat, McKenney takes to the panto stage as readily as he took to the opera stage in Orpheus. His versatility and his ability to charm and seduce his audience makes him an ideal adversary for the boy-like Pan created by Maddern.

An ensemble of talented performers sing and dance their way from London to Neverland to Hook’s pirate stronghold. The choreography has contemporary hip-hop pace and appeal. The slapstick routines with Smee and his pirates – Matt Geronimi, Michael Stone, Ric Pragnell and Jay Johns – are predictable, trite, well executed and just a little bit sassy. They have the young audience in fits of laughter – and their parents smiling wryly.

In true pantomime style, this is good family entertainment and a great way to introduce kids to the magic of musical theatre and theatrical comedy.