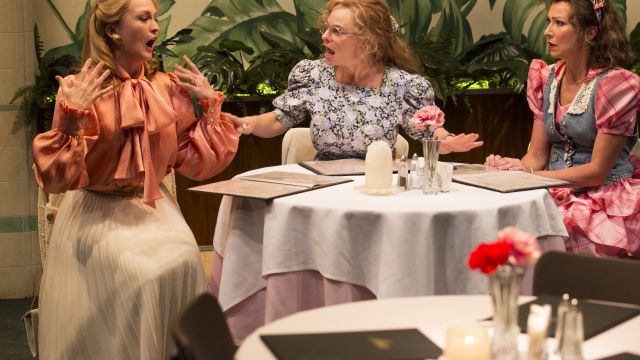 Sydney Theatre Company had its first production at the Wharf in1985. It’s fitting then, that it has chosen to open its 2015 season with an Australian play written and set in the 1980s.

After Dinnerhas lost none of its touching exposure of human frailties – nor its hilarious humour. Five clever and very experienced actors, and an intuitive director, find every poignant nuance of Andrew Bovell’s very recognisable characters, whilst still making the most of the comedy with which he softens the blows of insightful social comment.

Imagine five lonely people seeking a little bit of fun in the bistro of a pub on a Friday night in the 1980s.

There are three women who work together. Dympie (Rebecca Massey) is a short, narrow-minded control freak. Paula (Anita Hegh) is younger, easily led, into fashion and longing for a good time. Monica (Helen Thomson) is recently widowed and new to a night out on her own.

The two men at an adjoining table have met through an absent friend. Gordon (Glen Hazeldine) is recovering from the traumas of a divorce and wants to talk about it. Stephen (Josh McConville) is a bit of a poser who wants to be seen as a ladies’ man, but has a few personal hang ups himself. 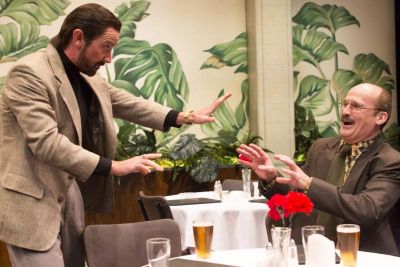 Director Imara Savage describes them well: “The characters feel larger than life … but scratch the surface and we find a deep and timeless yearning for human connection …”

As the night proceeds they all expose frailties, failings and foibles … including some relatively frank – and funny – discussions about sexual inadequacies that well may have been a shock for some audiences in the 1980s.

The designers have recreated the style and sound of the period. Alicia Clements’ costumes have all the flamboyancy of the 80s. Her set is a typical pub or club ‘show room’, complete with painted monsterioso leaves and ‘low-risk’ carpet. Verity Hampson (lighting) and Steve Francis (sound) have had fun creating the atmosphere of the time and highlighting the more intense moments.

Rebecca Massey is irritatingly realistic as poor, disillusioned Dympie, who disapproves of everything yet yearns for acceptance. Massey’s expressions and reactions are as tight as the control she tries to exert over her companions, and, as such, are incredibly funny … and incredibly sad. She is exceptional in this role.

Anita Hegh is as light and airy as Paula. She wears her pink, flouncy costume with the overt charm of the time and finds in her character the subtle mixture of gaucheness, warmth and openness that Bovell has written into her lines.

From the first moments of the play, Massey and Hegh establish a rapport and timing that that sets the pace of the play. 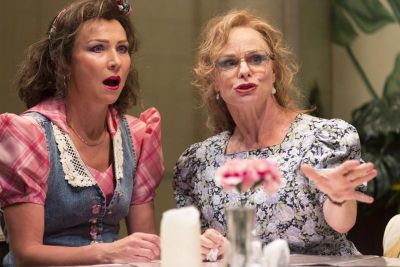 Helen Thomson’s versatility as a performer is a given. As Monica she uses her comic timing to accentuate the instability and yearnings of the character. From her awkward entrance to her tipsy monologue to her flirtatious conquest of Stephen, Thomson shows the debilitating effect of repression and the sheer joy of release.

Glen Hazeldine finds all the loneliness and inadequacies of Gordon’s character. He is hesitant, unsure of himself, socially inept – but hopes this night out with other guys will give him the chance to pour out his feelings.

Unfortunately Stephen isn’t into that sort of male intimacy. McConville’s Stephen  is as oily and sleazy as Gordon is awkward and retiring. He leers at the women, sizing them up. He’s there to drink and get some ‘skirt’. But, cornered by Gordon and the story of his marital relations, he too loosens up and gives a graphic account of his own sexual inadequacies.

Both actors play off each other beautifully. Bovell’s script demands fast responses and snappy dialogue and they don’t miss a beat.

The very last scenes of this production are craftily timed, especially a moment of pathos that is stunningly executed by Massey.

Though there are moments in the production that are almost farcical, there is much in the play with which one can identify. Leaving it set in the 1980s may seem to remove it from today, but the characters and their problems still resonate despite how humorously Bovell has presented them.