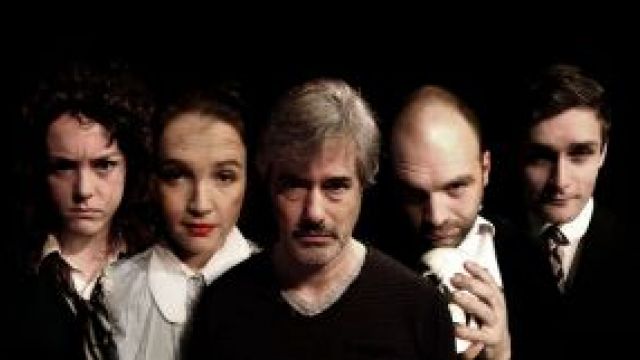 This production is beautifully edited from the original by the director Trent Baker (assumedly with the assistance of Dramaturge - April Albert), expressively lit by Doug Montgomery and atmospherically underscored with richly evocative music by James McGauran.  The initial scenes in After Hamlet introduce Trent Baker as director/auteur who one senses would tightly arrange and coordinate everything to an exacting standard if he had the required time.  As it progresses it melds, perhaps inevitably, into something of an actor’s showcase.  However it begins artistically with a beautifully lit Tom Molyneux as Hamlet in a rarefied atmosphere that is enchanting.

The original text is so finely edited that many of the well-known and often quoted lines are highlighted throughout. It is however difficult, with a pretty sound knowledge of the story, to know if this edited narrative, with actors playing multiple roles and even doubling in the role of Hamlet, makes complete sense to the un-initiated.

Jason Cavanagh as Hamlet displays the energy and strength he brings to the stage as a serious actor.  Susannah Firth’s Gertrude is contained elegant and commanding.  Freya Pragt presents us with a lovely straightforward Rosencrantz and a complicated misguided Ophelia of a forthright innocent but slightly damaged nature. As youthful Hamlet, Tom Molyneux is convincingly petulant and troubled. His Laertes is clearly a young man doing what must be done in the face of great misfortune. Sebastian Gunner portrays a colorless and unlikeable Claudius.

With strong, effective atmosphere created with light and sound - it would excellent if this ‘mise en scene’ could be extended to design and costume design. Perhaps five designers could be included in next year’s repertory season (if there is to be one).

From where I was sitting there were some exquisite photo opportunities, although I think some of the other viewing angles may not have had such great sightlines.

After Hamletleft me wondering if, in this rather unrehearsed process, the director has license to add and tease things out from day to day.

I can boast that I have seen the first night of the first play in this season Pygmalion and the last night in the fifth play After Hamlet.

SO CONGRATULATIONS 5pounds - you did what you said you were going to do!  And yes it was well done, successful and was fascinatingly as an exercise, and entertaining and satisfying as theatre.  And, blimey, it must surely have been rich a training ground for five lucky, brave and hardworking actors.