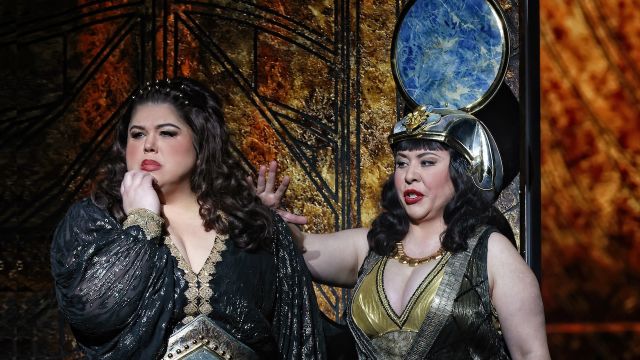 Aida returns to Sydney Opera House, three years after its first run, with all production bells and whistles in place: all those massive LED panels that waltz about the stage, joining up to form giant tableaux of snakes writhing, storms, sunsets, galloping horses and naked women on guard duty.

The work of Italian designer team Gió Forma, the LED panels are indeed striking, wafting about in brilliant combinations, at times taking all the attention from hard-working singers. Digital Content Design is by D-Wok, another Italian design company. Mind you, if you sit to the sides you wouldn’t get the full visual effect.

And there’s little space left on stage for the masses of chorus people required for this majestic work. Dozens of folk – maybe 100 - dressed up to the nines, sometimes performing intricate movements, are pressed and squeezed into pockets of the stage. At least there are a dozen underdressed dancing girls who get plenty of time in the Egyptian sun. They beat the sumptuously overdressed court into a cocked hat.

The staging is massively improved in the second half when the tension between Redamés (Stefano La Colla) and Amneris (Elena Gabouri) boils over, and Aida (Leah Crocetto) openly claims his love. The three sing mightily and movingly, the set stops spinning and the chorus gets a long break.

In the final depiction of an Egyptian underground mausoleum, setting and production score major points. Redamés settles for lonely death, while Aida tries to reach him and Amneris comes riding his burial stone from above. The score is gorgeously played out. Under Conductor Lorenzo Passerini, a huge orchestra plays Verdi’s massive work with style and grace, even putting eight trumpeters in the audience for a great rendition of the best-known tune.

The production by Davide Livermore is lively, spirited and well drilled. And Leah Crocetto and Elena Gabouri let rip with brilliant diction and heart-stopping edge. While they are singing, you forget everything else.