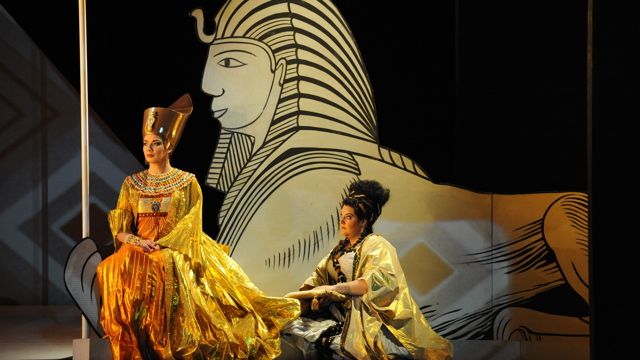 Opera companies across Australia have pooled resources to stage a new production of Aida with fresh choreography from Graeme Murphy.
It premiered in Perth last year and Sydney was its second outing.
The set is simple and clever. At the back of the stage are projected images, often along the theme of a pyramid, perfect for the love triangle at the centre of this story. At the front of the stage is a length of water to represent the Nile. Just behind it, two tracks running horizontally across the stage allowed for a procession in the grand sections of Opera – free of Elephants but rich with symbols. A boat occasionally appeared on the water.
Often the movement was portrayed in the style of hieroglyphics.
There were many beautiful moments portrayed by dance. My favourite was a scene portraying lovers, where a striking nymph dived in and out of the water.
My only criticism of the choreography was the movement of the chorus (obviously with less dancing ability) did not blend seamlessly with the dancers.
Vocally the stand out performance was by Dongwon Shin as Radames. whose voice is so strong it sounds like a musical instrument. Tamara Wilson was passionate and powerful as Aida, however Milijana Nikolic as Amneris – the Princess of Egypt was slightly overwhelmed by the orchestra in the first act, but rose to the occasion later in the opera.
I understand this production is almost a sell out and that is well deserved.
David Spicer