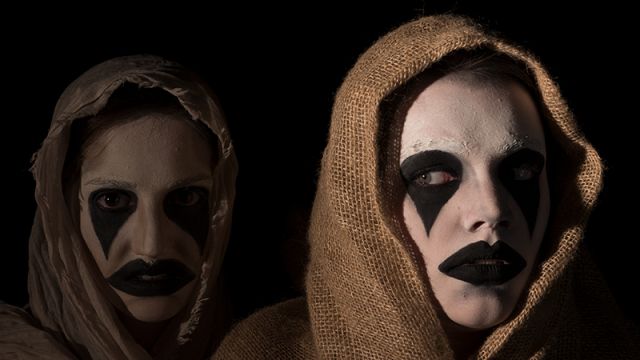 Euripides’ Alcestis was first performed in Athens in 438 BCE and is arguably the first ‘tragicomedy’ in world drama. It has always been regarded as a ‘problem play’ because of its combination of tragic and comic elements; it doesn’t easily fit into any clearly defined category in that its complexity raises as many questions as it addresses.

The play has, however, inspired numerous artists including T. S. Eliot whose The Cocktail Party is loosely based on Alcestis, as well as Robert Wilson and Laurie Anderson. Wilson’s famous productions in 1986 and 1987 also highlighted the cross-references to a classical Japanese kyogen play that deals with the same subject matter. Essentially this involves the question of who would you die for?

Briefly, the story is as follows – King Admetus of Thessaly had been granted freedom from Death due to his past hospitality to the god Apollo (or Phoebus). However, when Death comes to claim Admetus he must find a substitute – that substitute is his wife Alcestis. Immediately after her death another old friend of Admetus arrives, the heroic and drunk Heracles who, once he finds out, vows to go down to Hades and bring back Alcestis – which he does, resulting in a kind of happy ending.

Scramble Prince Theatre Company is a touring youth company based at Eltham High School. They take great liberties with Euripides’ plays, but then again so did Robert Wilson. While this production may lack depth due to its committed but youthful cast, nonetheless, it does capture some of the complexities inherent in the original drama. It includes the problematic question of who would you die for, but also the apparent indifference of others to human tragedy. This indifference is evident from the beginning with Admetus seemingly disconnected to Alcestis and her sacrifice. She pays for her sacrifice in a harrowing scene in Hades when she cries, ‘This is not what I expected’. Admetus’ indifference is later clarified due to his homosexual relationship with Heracles.

Whilst this production’s interpretation is slightly sensationalised, nonetheless, it has a plausible side and adds to the complexity of the production. The indifference is also marked by the Chorus, led by a peasant goat-herdswoman, who reveals to Heracles that the common people don’t really care; for them what happens to the rich and famous is essentially just ‘entertainment’.

This is a highly sophisticated and excellent contention from this very young cast. The acting may be full of conventional attitudes and posturing, but there is also depth in the extremely effective use of traditional Gaelic songs.

I applaud the teachers involved, not only for the boldness of this production but also for simply revealing to these young people the awesome wonder and relevance still to be found in world of classical Greek drama.

I had never seen a production of Alcestis so I am also very grateful for this opportunity and can only encourage others to go and see this production of a highly complex and rarely seen play.