The Alchemist by Ben Jonson 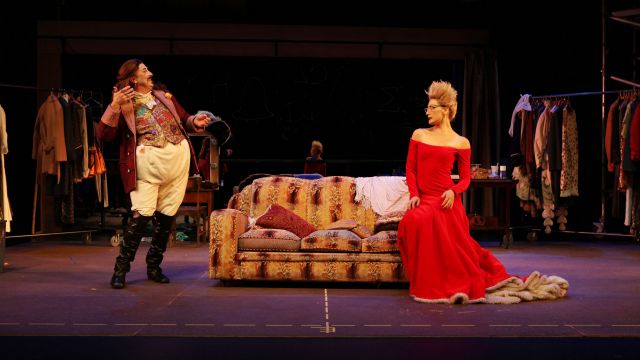 I left the theatre delighted! I’d arrived apprehensive.
Bad memories of unfamiliar Shakespeare plays presented by well-meaning community theatre players who couldn’t cope with Elizabethan style were banished.
Twenty-two accomplished actors, eight creatives and director John Bell created a simple but flexible performance concept with just a sofa, a table and chairs and two racks laden with costumes.
Actors select signature bits and pieces to establish their character and romp through their scenes with gusto. Four hundred years after this piece was written we recognise the stereotypes instantly. Greed and gullibility are the themes - how apposite today.
A bold, frenetic piece, the actors use clear body language and intention to clarify the action, even if audience members miss the dialogue or what it means. (Playgoers may be surprised occasionally to hear words we consider offensive today; they were acceptable vernacular then.)
A big mirror across the back means we can’t miss character stereotypes being gulled, scammed or conned by their own choice.
Even the opening and closing music links the eras: The Clash’s 1979 hit ‘London Calling’ identifies the setting and the themes.
The Alchemist is a comic roller-coaster ride: sit back, relax, watch, listen and surrender to the rambunctiousness. It’s a big show, large cast, highly entertaining and thought-provoking.
Jay McKee