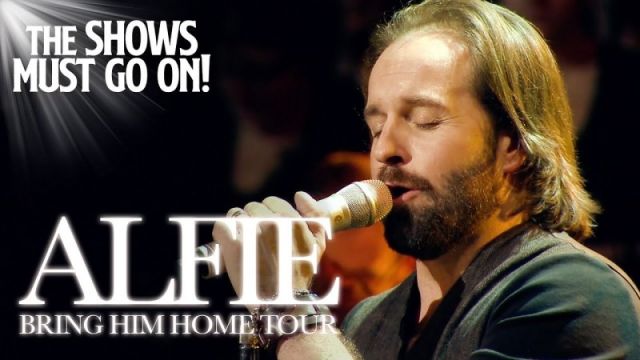 The Shows Must Go On continues its free streaming this weekend with Alfie Boe’s Bring Him Home Tour from the Royal Festival Hall in 2012. The British tenor, who first came to notice in the O2 Arena Concert Production of Les Misérables (2002), is in thrilling voice, with impeccable phrasing, as he sings a good selection of modern musical theatre favourites. He’s a knockabout ‘English lad’ who shows a little bit of his Blackpool roots in his patter, and has fun on the concert stage by wryly sending–up his orchestra and fellow guests. But it’s the voice that continually gives the goose-bumps. Hitting impossibly high notes he’s a joy to listen to whether he’s singing musical theatre or pop.

The concert started with the most glorious version of Ragtime’s ‘Wheels of a Dream’, with him accompanied by the chorus and the orchestra showing off its majestic sweep and colour. He quickly followed with Sondheim’s ‘Being Alive’ (Company), Lloyd Webber’s ‘As if We Never Said Goodbye’ (Sunset Boulevard), the Sherman Brothers’ ‘Hushabye Mountain’ (Chitty Chitty Bang Bang), before he brought on his first guest Matt Lucas, to trade quips and duet with him on ‘The Impossible Dream’ (Man of La Mancha).

A medley followed which included (‘Some Enchanted Evening’/‘Someone To Watch over Me’/‘If I Loved You’/ ‘On the Street Where You Live’), and his second guest, the gauche and young 20-something Tom Fletcher from the boy-band McFly. They sang “Empty Chairs at Empty Tables’ with Fletcher doing an acceptable job of the high tessitura notes.

He closed the first-act with a stunning interpretation of the Blood Brothers standard ‘Tell Me It’s Not True’.

The Second Act was more of the same and a bit more poppy: a medley of James Bond hits, Fletcher appearing again and accompanying on guitar in John Lennon’s ‘A Day In The Life’, Spice Girl Melanie C, dueting on ‘You’re All I Need To get By’, and young Chakira Riddell-Morales with a sweet ‘Castle On a Cloud’ (Les Miz). Claude-Michel Schönberg joined him at the piano for his signature ‘Bring Him Home’, and he closed the concert with an all-stops out ‘Come What May’ (Moulin Rouge), with Melanie C, and the chorus.

Encores included Boe and his guests letting their hair down for a swinging Dixieland version of ‘Jacob’s Ladder’, which featured Boe taking a turn on the drum kit.

Boe is a one-man Il Divo, sings the same repertoire and hits the same notes. He’s currently regarded as one of the best musical-theatre tenors and this concert proved why. Don’t miss it!