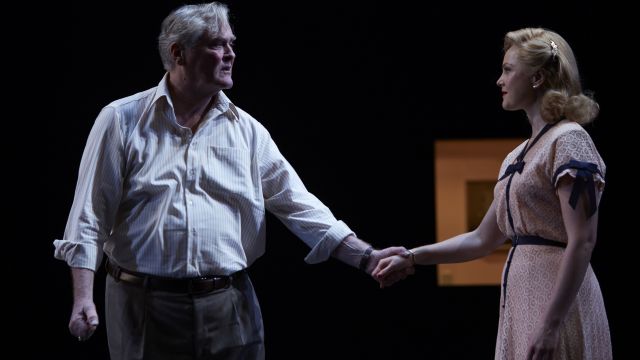 The Sydney Theatre Company may have, without plausible explanation, just lost its new artistic director Jonathan Church back to Britain, but meanwhile onstage its resident director Kip Williams in in powerful control of his material.

All My Sons is Arthur Miller’s griping family thriller set on one day in 1947, as the criminal wartime secret of business man Joe Keller is about to explode.

As Mrs Keller (Robyn Nevin) stubbornly refuses to accept her long missing pilot son is actually dead, Joe, with his awkward twinges behind a rollicking bonhomie (John Howard), invests all in his remaining son.  But the idealistic Chris Keller (Chris Ryan) is today proposing to his brother’s sweetheart, Ann Deever (a superbly nervy Eryn Jean Norvill).   Her father, Joe’s junior partner in his engineering business, is imprisoned for the crime that we are to learn is really Joe’s – a crime of greed that killed dozens of American pilots.

From the start, Williams’ outstanding cast plays the lurking avoidance behind the backyard banter of this family reunion, but by the end the secret, and its moral revelations beyond the family, is the high drama of Greek tragedy. Alice Babidge’s set helps by minimising naturalistic detail in an open stage backed by the silhouette of a two storey house, black, bleak and studded with windows to spy through.   And Williams fills that open stage with actors who are wrenchingly true but also reach beyond private predicaments to Miller’s bigger theme of social responsibility.

Joss McConville as Ann’s embittered brother, long charmed by the Kellers but now hateful, underlines the moral ambiguities faced by this new post-war generation of Miller’s.  Babidge’s costumes dresses this period with flair but William’s production speaks across time and way beyond that backyard.