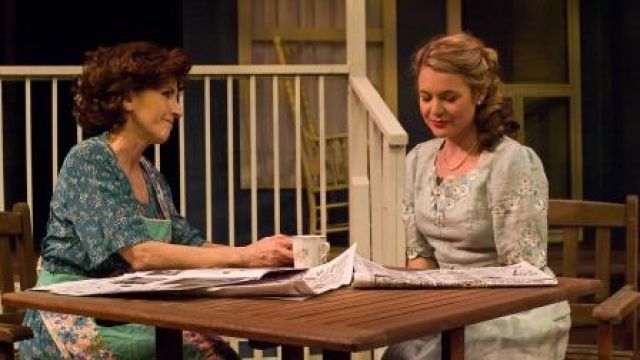 All My Sons may seem like it is a play about a bygone era, yet many of the themes that were highlighted in this production were relevant to a contemporary context. Miller’s text is intriguing in the way it shows how the personal cost of war also transforms to a wider loss that is felt in broader society.

Kate Keller (Julie Arnold) is played with a forcefulness that makes her pain from the loss of her son very palpable. Arnold’s presence on stage created a strong dynamic between all the characters and is often central to the more dramatic scenes. Joe Keller (George Werther) was portrayed as a truly endearing character which gives the tragic revelations great impact.

Anne Deever (Claire Abagia) conveyed both elements of naivety and shrewdness that gave her character complexity and depth. The nuances in Chris Keller’s (Liam Gillespie) characterisation were not as clearly delineated. Chris is faced with some enormously challenging moral dilemmas and this could be accentuated more. Overall, the entire cast provided some substantial and solid performances. The set is extremely evocative and creates a wonderfully homely and warm environment. Although the atmosphere among the characters changes, the atmosphere created by the set seemed to remain static. However, the staging is beautifully managed and the production as a whole gives a very faithful portrayal of this exceptional text.