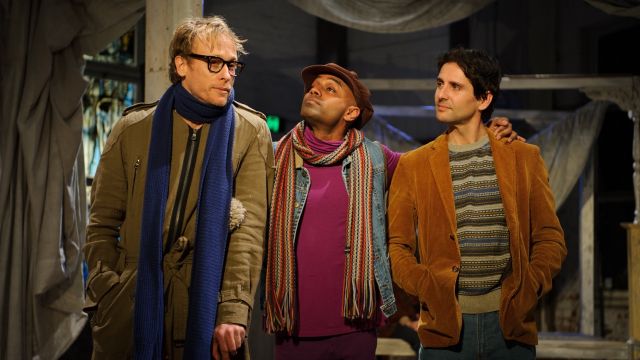 Angels in America is a tale on an epic scale and Kushner’s incredibly rich and profound text has a well-earned iconic position in the LGBTI political landscape. The challenges involved in staging this lengthy play, set in the US, are as monumental as the piece itself. The text explicitly and unapologetically addresses confronting issues such as the AIDS epidemic, the corrupt nature of politics, racism and homophobia. This production breathes life into the text and animates it with majesty. The performance has a force which is frequently surreal yet the story is also allowed to unfold with gritty realism.

The larger than life characters are approached with candour and daring and each performer conveys a form of delight in their portrayal. The opportunity to accentuate the irony and parody that characterises the play is perfectly measured and calibrated through every encounter. Roy Cohn (Brian Lipson) is amazingly both charming and perfidious. Lipson makes the sinister aspects of Cohn’s persona vivid through his exuberance and imposing nature and always ensures that he is as captivating as he is repulsive.  Prior Walter (Grant Cartwright) is portrayed with enormous sensitivity. This delicate approach to his emotional journey is combined with a physicality that makes his presence on stage astonishing. 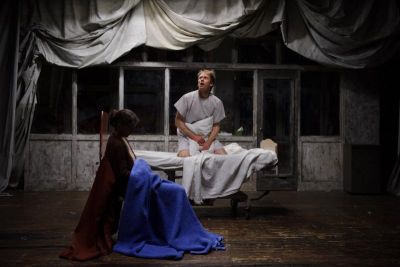 The superficiality of Louis Ironson (Simon Corfield) is conveyed as a cynical defence mechanism, and the fragility that Corfield emphasises provides an avenue for genuine empathy for the character. The level of discomfort that Joe Pitt (Caleb Alloway) experiences with the skeletons he harbours quietly eat away at this character. Alloway accentuates how out of place Pitt seems to be in almost every social space he occupies. Harper Pitt (Emily Goddard) is portrayed with immense emotional pain and turmoil but this is never merely unloaded on to the spectator. In an extraordinary performance Goddard embodies her anguish and allows the audience to perceive its nuances and permeations in an extremely visceral manner.

The ethereal quality of the Angel of America (Margaret Mills) is expertly captured by Mills. She is able to be shadowy and graceful as well as solemn and stately and her versatility as a performer is often inspiring. Hannah Pitt (Helen Morse) is approached with a realism that highlights an uncanny familiarity with the persona. Morse makes Hannah pitiful without denying her strength and resolve. Belize (Dushan Philips) is portrayed with a naturalness and ease that makes his character extremely endearing. 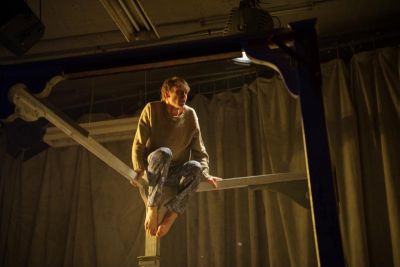 The set and staging are in perfect harmony with these magnificent performances and align seamlessly with the beauty and intimacy of Kushner’s text, which thoroughly explores ordinary, everyday moments. The staging is modest but extremely resourceful and innovative. Characters are able to linger in the space and this often facilitates the various ways in which they are connected or their lives are intertwined. The set is dominated by an overall pale colour which results in maintaining a direct focus on the characters. However, it does not have a neutral quality and the distressed furniture effect often seems to reflect the inner state of the characters. When colour is employed it is done in a bold and striking manner and the effect is mesmerising. The stark contrasts that are created in the stage design help to highlight the scale of the drama enacted in the story. The epic proportions of this play are masterfully interpreted and result in a dazzling and profoundly moving production.