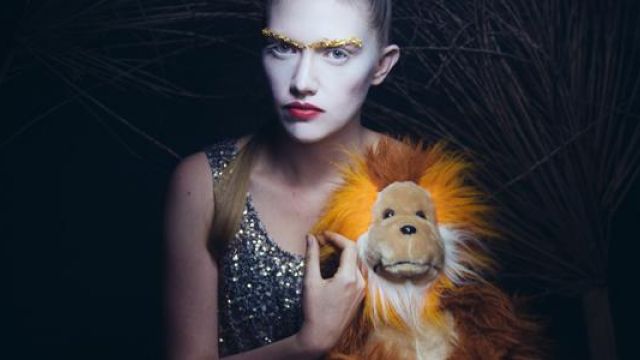 Two 20-something BFFs hang out, talk about sex, listen to music, dance, listen to talk radio, talk about sex.  Catherine (Rachel Perks, who’s also the writer) sits up straight and prim. Cybell (Artemis Ioannides) wriggles her arse at the audience. She is a loud and enthusiastic participant in the world of no strings, no relationships hooking-up, fuck ‘em drunk or sober.  Hey, that guy from the party texted me – should I fuck him?  But Ms Ioannides is too good an actor; we sense the enthusiasm is revved up and forced.  Catherine, for her part, has the beginning of doubts and dissatisfactions that she can’t quite articulate.

The two women have a boom box.  On it, there’s a cassette tape: a 30-something woman - married but childless - tells how she has it all.  We are not convinced and neither, really, is she…

And then there are the monkeys (or are they aliens?): Sylindion (Tamara Natt), Collin (Oliver Coleman) and Bugan (Jackson Trickett).  I only know the names from the program and I’ve no idea why three monkeys have these names or if they need names; it makes no difference.  There’s a brief, hokey animation projected of a flying saucer landing and these creatures enter, sniffing and exploring.  Dressed in kind of Star Trek costumes (design by Kim Ritchie), these actors must have spent many hours watching nature documentaries; their simulation of chimpanzees is very convincing, particularly the alternations between affection and aggression.  This is, naturally, entertaining, but as they are juxtaposed with the two women, we begin to reflect on the similarities between human and simian behaviour.  As the show proceeds, these monkeys listen to the cassette tape and they evolve, as it were.  To say more would spoil the surprising but strangely touching reveals that follow.

Meanwhile, Catherine takes up running.  It makes her feel better in ways she can’t explain.  Long distances.  Sometimes all night.  She broke it off with her boyfriend and she has confrontations with leery, boozy men.  She’s angry.

Her friend Cybell gets angry in return.  Is Catherine weird, maybe a lesbian?  When Cybell wakes up somewhere after a wild night with broken teeth and no knickers, where the fuck was Catherine?  What Catherine’s doing, of course, is looking after her soul.  To Cybell, Catherine is disloyal, not playing the game, undermining the assumptions that Cybell (unhappily) lives by.  Without understanding it, Catherine raises the central issue of the play: the separation of sex and the rest of life – and all the implications of that, including that of to whose advantage is that?  Hence angry because deeply, deeply dissatisfied – and the sex per se, actually, isn’t that great anyway.

With this show, the tiny space Upstairs at Errol’s café and bar (around 35 seats) bristles with very contemporary ideas and insights – and with great imagination in presenting them.  Every element may not be immediately or entirely clear or integrated, but that’s brave and stimulating rather than annoying – something to chew on.  Director Bridget Balodis keeps the diverse elements ticking along, including the use of projected video diaries and text messages – aided there by video artist Isobel Taylor Rogers, Raya Slavin’s sound and Amelia Lever-Davidson’s precise and selective lighting.

Angry Sexx may be a fierce and, yes, bleak critique of contemporary life (you have been warned), but the intelligence and originality of the text, and of its realization make this dense, complex little show well worth seeing.