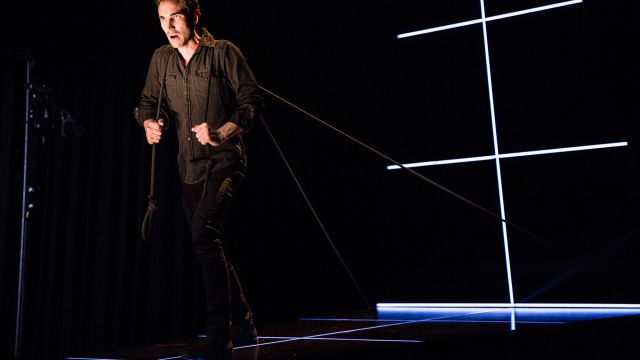 British author George Orwell’s concern for the world began in the 1930s with the poor and unemployed in the Depression. Reporting on the Spanish Civil War led to his concern about communism, fascism and his fear of another war.

He wrote Animal Farmin 1944 as “a political fable” based on the Russian Revolution and Joseph Stalin's eventual betrayal of the people. He followed this in 1949 with 1984, which warned of the potential dangers of totalitarianism.

Several adaptations of 1984 in the past few years have used Orwell’s work to make comparisons with contemporary political dishonesty and domination, so it is probably opportune that director Geordie Brookman decided to revive the dictatorial, power-hungry pigs of Animal Farm.

Brookman’s decision to use the genre of storytelling preserves the graphic simplicity of Orwell’s writing. “Never use a long word where a short one will do,” he advised – and his descriptions of each of the farm animals, the neglected conditions from which they rebelled, and the eventual greed and cunning of the tyrannous pigs are vivid and explicit. In the hands of performer Dale March, those words and the social criticism behind them become scarily powerful.

Looking remarkably like photographs Orwell himself, March, dressed in back, and lit eerily from the side, introduces the condition of the farm and its poorly treated livestock. His carefully controlled voice defines the dark space that the property has become – and describes each of the animals in the words that Orwell chose so prudently.

As the animal rebellion proceeds, the set is revealed as a dark triangular shaped ramp and rise. At times, lines of light flash cross it. At times sound effects shock. Constantly March controls the audience, his eyes fixed, his voice changing as he becomes each of the animals.

As the pigs realise their ability to exploit the less intelligent animals, March draws the audience in to the horror of their subversive take-over of the farm and the cruelty that follows.

Orwell’s message is clearly told in this production that Brookman has brought from Adelaide for a brief season in Sydney.