Animals Out of Paper by Rajiv Joseph 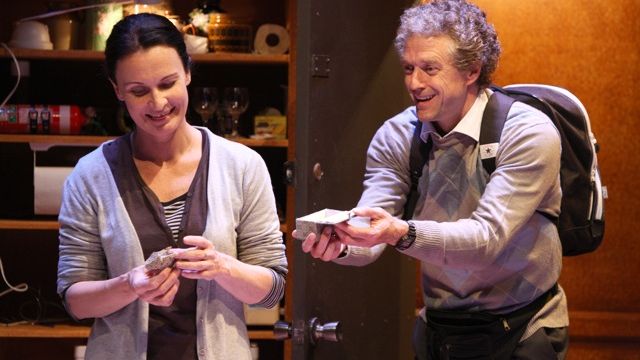 A light, engaging three-hander play, Animals Out of Paper builds on a wafer of plot, with genuine humanity, wit, awkward romance and a touch of hip-hop.

The Ensemble production works nicely despite the play’s rather too obvious central metaphor, comparing the marks left on life and relationships to the folds of origami. Perhaps the metaphor misses because origami tends to be talked about rather than integrated into the action, except as completed works.

Natural expectations of actually seeing some paper folding aren’t fulfilled. Ilana, a top origami artist (Tara Morice), has ‘folder’s block.’ Origami prodigy Suresh (Arka Das) is a natural, though we only see his pre-completed works. Andy (Drayton Morley) is a bit of an origami groupie, as inept at the art as he is at relationships.

Cocooned in the disarray of her studio after marriage break-up and the loss of her three-legged dog, stacked take-away cartons are as close to her art as Ilana can get. An obsessive fan, treasurer of American Origami, breaks her solitude; ostensibly it’s to collect her dues, but primarily it’s to have her tutor one of his students, a troubled young man and an origami wiz.

Taut direction from Mark Kilmurry ensures that though the script loses impetus later in the second act, characters we've engaged with and their interactions continue to carry the day.