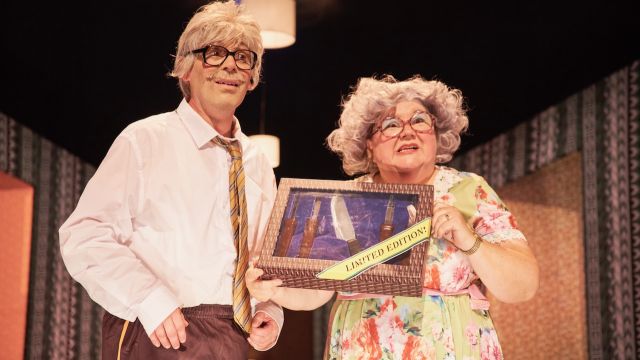 Jim (Daniel Tobias) and Barb (Clare Bartholomew) are both familiar yet surprising characters. These personas are an innovative invention of the director and the performers and they draw on a variety of comedic strategies to bring them to life. Jim and Barb undoubtedly belong to the Commedia dell’Arte tradition where the characters are mostly driven by their bodily needs and their primary emotional desires. Food and love are often the motivations for their actions providing enormous comic circumstances usually played out physically.

Tobias and Bartholomew are clearly talented in this tradition and they cleverly weave mime, movement, gesture and dance into the performance. The set design combined with the choreography of the show also exhibit an impressive deftness in this arena. The elderly couple are somewhat paralysed by their physical decline brought on by a combination of age and 50 years of marriage. The characters first appear larger than life thanks to some clever set design which alters the perspective of the stage and creates some wonderful visual gags.

The show is entirely reliant on physical theatre as the script involves little more than the names of the two characters. However, the performers are able to convey almost every single thought, both pleasant and sinister, that passes through their minds. Bartholomew’s facial expressions are often magisterial in this enterprise. The attention to detail and the delightful nature of the set reiterates the idea of a long history and a sense of staleness. This creates a charming set which seeps out into the audience while also keeping the stage quite distinct.

The Anniversary certainly pushes all the boundaries of decorum and this generally generates delightfully entertaining theatre. However, there are moments in the play where the jokes around domestic violence may require some reconsideration. The show relies heavily on slapstick but sometimes at the cost of being somewhat distasteful when it could have been poignant or insightful.

The highlights of the show include the madcap mayhem which occurs at moments such as medication time and the preparations for the arrival of guests to celebrate the anniversary. The energetic pace belies the languid appearance of the characters and this is just one of the many tactics employed to contrast our inner and outer lives, regardless of age or infirmity.