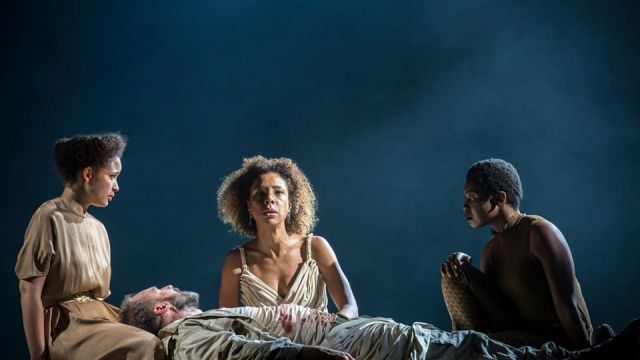 In this contemporary set production of one of Shakespeare’s late and most complex, layered and contradictory plays, Ralph Fiennes plays Antony as an already fading playboy.  The erstwhile war hero, in his mind responsible for young Caesar’s power, teeters on the brink of over the hill, trading on his past glories, drinks too much, getting a little porky, silver threads in beard and hair – and sexually obsessed with Sophie Okonedo’s quicksilver Cleopatra.  She is skittish, imperious, girlish, peremptory, sensual, cold, impulsive, calculating, uninhibited and controlled.  Ms Okonedo gives us all this and makes believable the ambivalent but admiring judgement of cynical Enobarbus (Tom McMullan) to Agrippa (Katy Stephens), ‘Age cannot wither her, nor custom stale/her infinite variety…  And Enobarbus appreciates what a show-woman she is (The barge she sat in, like a burnished throne…) – and has to be.

As played here, enlivened by the chemistry between the two leads, it is a completely convincing portrait of middle-aged, burning but doubt-plagued passion.  Whether others are present or not, director Simon Godwin ensures that they can’t keep their hands off each other.  Much poetry is devoted to their love (Eternity was in our lips and eyes, / Bliss in our brows…), but there’s a desperate reality to their mutual lust – and it endears them to us as a man and a woman rather than as a military general and a queen – but that is exactly what brings about their downfall.

The irresistible love of Antony and Cleopatra (or the love they choose not to resist) is the clearly dramatised fulcrum of the story and Mr Godwin makes that entirely clear.  Without it, the power grab machinations of young Caesar would lack opportunity.  If Tunji Kasim plays Caesar in a stilted manner, reciting like a robot reading a teleprompter - even with the finest speeches - it is because his Caesar is the complete, chilling antithesis to Anthony.  Not one move is spontaneous, not one emotion is anything but self-serving performance.  And of course, he wins.  The only moment Mr Kasim’s control falters is when presented with the bloody sword with which Antony has tried to kill himself – a nice reveal of the boy behind the façade.

Hildegard Bechtler had the most bountiful resources, using all the Olivier Theatre’s deep and wide space, her design ranging from Cleopatra’s marble and mosaic palace, with water-filled wading pool, to the submarine of the rebel Pompey (Sargon Yelda), to Caesar’s war room complete with video screens showing the battles outside and the battlefield itself.  A skilful, exquisitely planned use of the revolve ensures seamless transitions between locales, emphasising Shakespeare’s juxtapositions of politics and passions.  More resources have been devoted to Evie Gurney’s costumes: bespoke suits and uniforms, contemporary battle dress, and sumptuous haute couture gowns for Cleopatra – a powerful woman always in the public eye.  Michael Bruce’s music – a mix of the martial and the ‘middle eastern’ knits the contending world’s together.

Here is a wonderful cast surrounding the charismatic leads, all of them – except Mr Kasim - speaking the text in a comprehensible, conversational way.  Mr Godwin’s direction is detailed and when someone – anyone - has their moment, we pay close attention.  The gender switch of Katy Stephens as Agrippa works perfectly, especially acidic in her opening summing up of the story: The triple pillar of the world, transformed/ Into a strumpet’s fool. 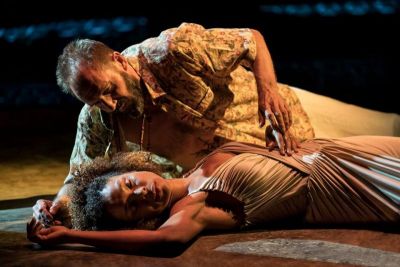 Hannah Morrish’s Octavia, coldly used by her brother Caesar and Antony too, begins so shy and bland that she is a lamb to the slaughter, but Ms Morrish has her grow convincingly in strength and insight. Mr Yelda’s suave and cocky Pompey is a fine portrait of the conceit that goeth before a fall.  Cleopatra’s handmaidens, Charmian (Gloria Obianyo) and Iras (Georgia Landers) exhibit such dignity and intelligence that we wonder at their unswerving loyalty to their queen.  Mr McMullan’s Enobarbus, as noted, is the observer: he finds every irony and his apparently ‘light’, facetious performance is a delight.  Enobarbus sees, as it were, both sides: - and in this play ‘both sides’ contend in rich opposition all the way through.

I remember at university a lecturer remarking that Antony & Cleopatra exhibits Shakespeare’s propensity for hair-splitting – that is, for ambivalence and ambiguity.  He gives and then he takes away.  Cynicism (as in Troilus & Cressida) butts up against nobility and courage.  Here, Mr Fiennes and Ms Okonedo commit themselves so completely to the humanity of their characters that the balance is almost lost.  Perhaps it is lost?  Dare I carp at Shakespeare?  Having made his central characters so human-all-too-human – the more so here - and had both miscalculate politically and militarily, had both desert a crucial battle, had Cleopatra cover her error by lying as a ‘test’, and then have Antony botch his ‘noble Roman’ suicide and have him hauled up the face of Cleopatra’s monument – only to die at the top – is all a little risky.  Despite the blood, it’s close to farce and it’s difficult to rescue these characters and reinstate them as tragic figures.

As a result, dare I say and despite the snake (live in this show), the ending does drag on beyond our feeling that ‘it’s over’.  But then that’s twenty minutes at worst of this three hours and twenty-five minutes of the best theatre: a text that shines and amazes with its intelligence and imagery, and a production that is quick, incisive, ironic, funny, horrifying and moving.

Originally reviewed during the cinema release.