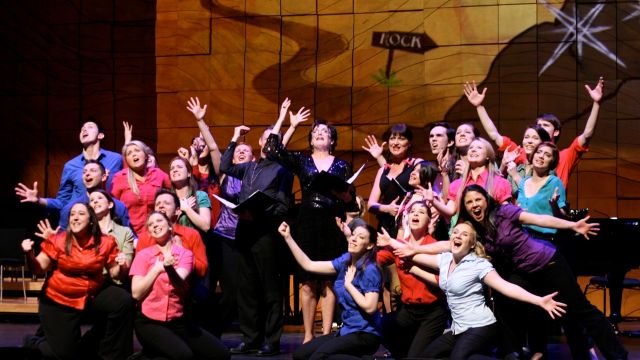 Stephen Sondheim’s Anyone Can Whistle has always been a problematical show. Its quirky plot, about an industrial town that fakes a miracle to bring in the tourists, was hardly standard Broadway fare in the 60s. It ran 9 performances, but it did feature a knockout performance by Angela Lansbury, her first in a musical. To celebrate Sondheim’s 80th birthday, Magnormos, as part of their A Sondheim Triptych, presented a concert version of the legendary piece, with Anne Wood in the Lansbury role. It was great to see Wood flexing her music-theatre muscles in something other than Mamma Mia, and delivering such a stylish and funny performance. She brought a nice brittle and acerbic edge to “Me and My Town,” “There’s A Parade in Town,” and the mad waltz “Cora’s Chase.” But as good as Wood was, the honors for the night went to Patrice Tipoki as Faye Apple, the frigid nurse who can only function sexually when disguised as the “Lady from Lourdes.” Tipoki’s treatment of the playful “Come Play Wiz Me,” “There Won’t Be Trumpets,” and the tender title tune was a knockout, and later, working with Dan Humphries (Hapgood), their duet “With So Little To be Sure Of” was a heartfelt emotional and extremely effective finale. Humphries also scored with the show’s anthem to individuality “Everybody Says Don’t.” Director Joyner kept the show moving, and with a cast of 47 that was no mean feat on the shallow stage of the recital hall. The accompaniment of twin pianos and percussion sounded thin at times, but Sondheim’s ambitious and fascinating score was the star of the evening.
Peter Pinne