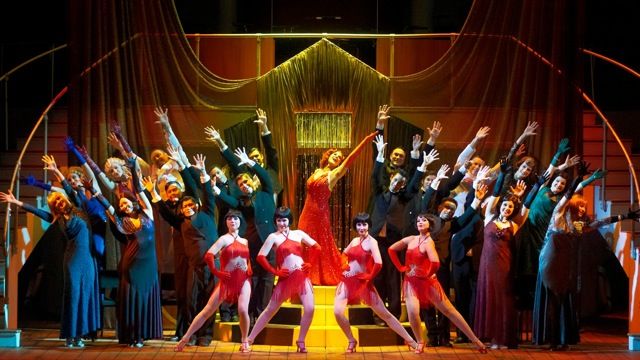 When you book a ticket to Cole Porter’s classic Anything Goes you can be assured of a sparkling night of theatre and Auckland Music Theatre and Amici Productions version delivers in abundance.

From the opening refrain of an old recording of Anything Goes to the final curtain this is a high energy romp through some classic Porter tunes.

Jackie Clarke belts her way through the show with true conviction and delightfully makes the role of Reno Sweeney her own.

In the role of Billy Crocker, Tyran Parke shows his versatility as a true leading man. He not only acts and sings amazingly but dances up a storm.

They are ably supported by Richard Neame in the role of Evelyn Oakleigh, showing his comic virtuosity, and Delwynne Winter as Hope Harcourt with a beautiful voice that could melt a million hearts. Ray Woolf as the blundering Elisha Whitney and Lynn Webster as the social climbing matriarch Evangaline Harcourt are perfectly cast. Their performances added some hilarity to the evening. The company in general is excellent, performing the choreography with passion and energy and obviously enjoying every minute of it.

The standout number for me was Blow, Gabriel, Blow, where the energetic choreography and spectacle of the number won me over more so than the title song Anything Goes.

The set moves in and out with ease, and costuming is outstanding, with the exception of Hope’s costumes, which didn’t seem to fit the character. Opening night saw a few glitches with sound and lighting but these I’m sure will be ironed out as the season progresses. One criticism would be on entering the theatre it would have been nice to have been met with some classic 30s house music instead of the modern music that was playing.

One of the many highlights for me, however were the performances of Erwin Cifra and Jarrod Lee as the Chinese converts Luke and John, who managed to steal every scene they appeared in with their classic comic duo act.

All in all this is an outstanding production that deserves to have full houses.