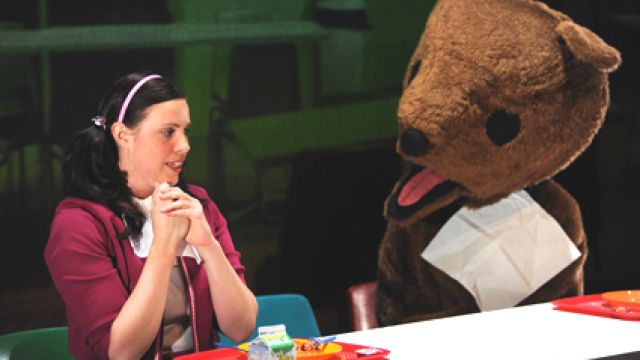 Apocalypse Bear Trilogy is a dark and hilarious comedy, very much of its time – now. As an uncompromising theatrical exploration of existential angst, it is full of fascinating hints, suggestions, ambiguities and shadows.

In the first play – The Fag from Zagreb – a complex, disjointed modernist soundtrack introduces a simple, partially pixilated set of a kitchen where the Bear (Brian Lipson) and the boy Jeremy (Luke Mullins) stand in uncomfortable exploratory conversation. This combination of Bear and vulnerable adolescent boy, with computer, infers danger. In Back to the Cafeteria, the same Bear is chatting with a young woman (Katherine Tonkin) whom confusingly relates as a hopeless young girl. The Bear requests, when their conversation is complete, she runs from his pursuit around the cafeteria. In foolish, naive compliance, the woman renders herself a victim. Finally, in At Last, a young couple, navigate their relationship and negotiate their desire to procreate. They seem uncomfortably stilted, and in the thrall of expectations of one another, rather than honestly and comfortably interacting. The set is unstable and, yes, the Bear is lurking. Again there is the implication that something profoundly distressing has also irrevocably undermined this social institution. No-one is safe – even in his or her own bedroom.

The Apocalypse Bear has, metaphorically, broad shoulders. This expressionless and vocally flat creature, a man in a bear suit, tacitly confirms truth in dark fears. Although not fully realised as a scapegoat, he is a repository for some very difficult pathological problems of social alienation.

Lally Katz’s unique work feels more like a dream, with a childlike sense of play at its heart – satisfying hungry, subconscious recesses, than a play. Her progressive journey has been supported over the years, as it is in this production, by constructive relationships with adventurous theatre makers such as Chris Kohn.