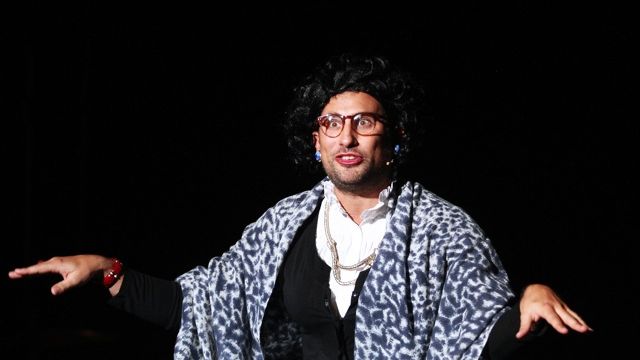 Jeremie Bracka is quite simply one of the best comic actors we have, and one of the most intelligent and astute writers. That combination allows him to overcome poor and pedestrian direction, fluctuating sound levels, blackouts and stage waits for no apparent reason and truly bad music (intentional or otherwise?) that is probably meant to be funny but isn’t. And the show ringing up 15 minutes late with a noisy audience who all seemed to know each other and played with their iPhones throughout, didn’t help either.

Ultimately though, it mattered not. Bracka’s charm, self effacement, and terrific characterisations overcome all shortcomings as he narrates his childhood and insular upbringing in Caulfield, “I thought Jews in Doncaster were settlers”… gives fascinating cameos of  his Egyptian father and Polish mother, “I inherited my father’s back hair and my mother’s testicles” and his brave venture into the world as part of the diplomatic service, which involved spending three years in Israel and discovering that there IS common ground between Palestine and Israel, but neither side wants to acknowledge it. “When two wrongs don’t make a right….try THREE!” It’s inconceivable that he still works as a lawyer by day, when he should be playing to full houses everywhere.

Bracka speaks deep truths buried in hilarious comedy. He sugar coats the pill to make it palatable, but we swallow the medicine nevertheless. Hi impersonations of both Arafat and Shimon Peres in therapy are brilliantly realised, and the mock political affairs TV programme on screen provides an interesting break, though it runs far too long. Given that the show has projection anyway, I simply don’t understand why it isn’t used to advantage to set scenes. A still of a fez denotes Morocco? A bowl of Matzoh ball soup denotes family Judaism? Either let Jeremie simply do the piece as stand-up, or make some effort to introduce some proper direction with real innovation and imagination. Adding atmosphere and ambience to a piece like this is the primary job of a director. Mister Bracka knows his shtick and needs no help with that. And one would expect sound and lighting to be of a quality to match the content by night two.

This is 70 minutes of sheer comedy delight from an excellent performer. Luckily I understood enough of the Yiddish to keep up, and the last ten minutes is both powerful and poignant. As my old vinyl LP says “You Don’t Have To Be Jewish”. And I for one would back his plan to ‘claim his inner child as a dependent’. Let’s send Jeremie Bracka on a peace-broking mission for the United Nations. We might finally get somewhere.