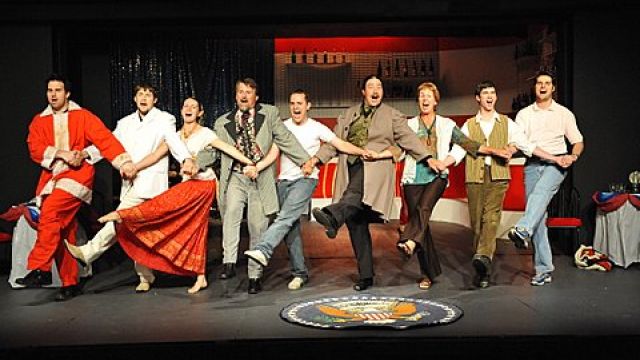 Roleystone’s Assassins abandoned the traditional setting of this musical, with this production set in a bar, presided over by a female publican/proprietor.
The Proprietor entered from the cellar (underworld?), naughtily attired in red, as she encouraged would-be assassins. This was an impressive performance by Carmen Miles, although singing two octaves above the original it sometimes felt a little beyond her range. Carmen also doubled nicely as Emma Goldman.
Peter (Pear) Carr played perhaps the most infamous assassin - John Wilkes Booth well, but shone in his role as President William McKinley. Other assassins included Charles J. Guiteau, played stylishly by Alan O’Neil; Leon Czologosz, gently played by Owen Measday; Guiseppe Zangara, empathetically played by David Wallace; Lee Harvey Oswald, played with great emotion by Tim How (who also played the balladeer) and the challenging role of Samuel Byck - played by David Semen.
The most outstanding, for me, were the women assassins, played by Lindsay Oelsnik and Emma Stevenson, who brought Sarah Jane Moore and Lynette “squeaky” Fromme to life with humour, while showing how frightening they were. The both sang brilliantly.
The set, based on the American flag, remained a constant reminder of American patriotism and culture.
Musically, under the care of Sarah Cosstick, this was a strong show; while Paul Treasure’s innovative direction gave the show great power.