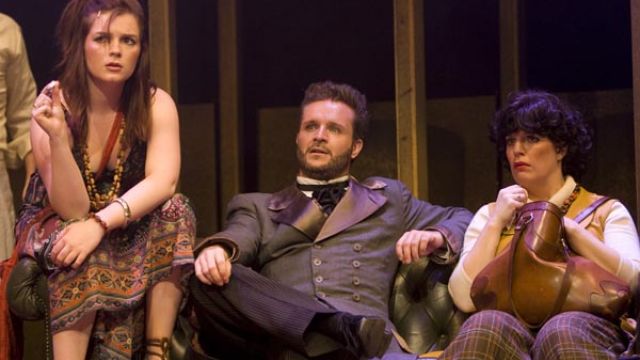 “Shoot to Win” is emblazoned across the arch of the shooting gallery where we first meet our ‘assassins’.
A lesser-known Stephen Sondheim work, Assassins (1990) introduces the audience to a number of (failed and successful) attempts to assassinate US Presidents and the social outsiders behind them.
The Proprietor (Gavin D Andrew), dressed in the stripes of the American flag, gives each assassin a gun and convinces them that “Everybody’s got the right to their dreams.”
Director Chris Hughes chose to line the cast across the front of the stage for the “Seasons of Love” effect. By breaking the fourth wall and addressing the audience openly, we are no longer seeing characters but other human beings we can connect with directly. Their appeal convinces us so successfully that we believe we all have the right to be happy, to achieve our dreams, to some sunshine … but we forget that the targets of these assassinations have just as much a right as we do. What of their dreams? What of their happiness? We won’t know.
The Proprietor and Balladeer (Nicholas Kong), the narrators / protagonists of the story, both performed brilliantly. In the future I’d like to see a lot more of Gavin on the stage rather than off hiding behind a camera lens. Nicholas performed to a consistently high standard throughout the night with the only disappointment being the couple of times he broke character to flirt with and charm the audience. Congratulations, Nicholas, on your well-deserved inclusion in STC’s Spring Awakening.
In scene 3, we find the assassins sitting around the Oval Office and watch them voyeuristically as if they were contestants on Big Brother.
Adrian Carr stole the show as Samuel Bick with his insane ramblings into his tape recorder. I commend Deryk Hartwick and Jason Bovaird for their lighting design, a highlight being the simulation of Bick driving down the highway to hijack a plane and crash it into the White House.
Shaun Kingma was very impressive in a role far removed from the last time I saw him as Horton in Whitehorse’s Seussical. Angelo de Cata stole our hearts as the evangelical ‘Charlie’ Guitea.
I do have to gripe about two unsubtle disappointments in the production. There are countless better ways to hang a character than to drop a few pillows dressed in baggy clothes from a fly line and Sara Jane Moore’s dog deserved a much more realistic (and probably more humorous) treatment than a stuffed $3.50 Reject Shop pooch. Otherwise, props were fantastic, especially Leonard Stelle’s stage weapons.
Edward Howard gave a good effort as Guiseppe Zangara, although in the future I’d like to see more of his own interpretation in his characters. David Gardette, Michael Bingham, Amy Larsen, Brett Whittingham and Amelia Ropé all gave strong performances.
Congratulations to Joseph Beckitt as MD. Assassins’ challenging score was tackled with skill and artistry. The only minor disappointment was instrument noise from the pit during some quiet moments.
It has to be said that while the Williamstown Mechanics Institute is a beautiful venue, a 100-minute production with no interval would have been even more enjoyable without pew-like seating and the heat inside the building.
Congratulations to WMTC and all involved. Good luck for all the well-earned MTGV nominations.
Ian Nisbet