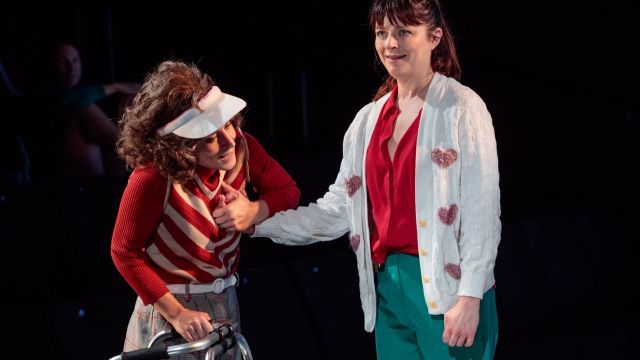 We all meet a lot of characters in life. If you’re a writer, why not create a play about them?

Atlantis is a new work by American-born, Australian-based Lally Katz. It is semi-autobiographical, inspired by people she’s met in life. “Hi everyone, I’m Lally Katz,” says an actor (the brilliant Amber McMahon) as she steps outside the first scene of the play. She tells us “almost everything” here is true and every character based on a real person.

This raises a question: is such a play going to be self-indulgent? Well, it would be — if it wasn’t so much fun. Katz is frank too, telling of how she had parts of her ovary removed. Because of this, she embarks on a journey of self-discovery back to America. It’s a country with its own struggles too. Miami - where she grew up -  is being flooded, going under the sea, just like Atlantis. Climate change is playing a part.

Even with storms and chaos, metaphorical and physical, humour remains central to this play. The creative team has clearly enjoyed staging it. Five actors play more than 50 characters. The fast-paced direction from Rosemary Myers reminds me of Girl Asleep, the Matthew Whittet play she staged at Belvoir last year (and in Adelaide before that). That play was very entertaining and this one even more so. Whittet stars in this too, portraying (among others) Katz’s boyfriend, grandfather and the daughter of her psychic. He is a charming actor. None of the others is weak, either: Paula Arundell hilarious as Electra (et al.), Luci Mastrantone cleverly portrays the psychic Bella (etc) and Hazem Shammas captures a very amusing Latino Texan cowboy (and others). It’s truly entertaining to turn a potential cast of thousands into a true ensemble piece.

But McMahon’s Katz holds the centre of attention, despite all that talent around her. Her character is bold and courageous but endearing as well. She’s just the kind of person you’d want hosting a party, which is just as well, considering that’s what is basically happening on stage.

The play is long - two-and-a-half hours including the interval - and would benefit from small trims. The ending, which veers away from comedy as it leaves any sense of factuality behind, doesn’t resonate as strongly as it could. It needs more dramatic punch.

But Atlantis is a fantastic work, in various senses of the word: not just fanciful or outlandish but  imaginative -  and very good.