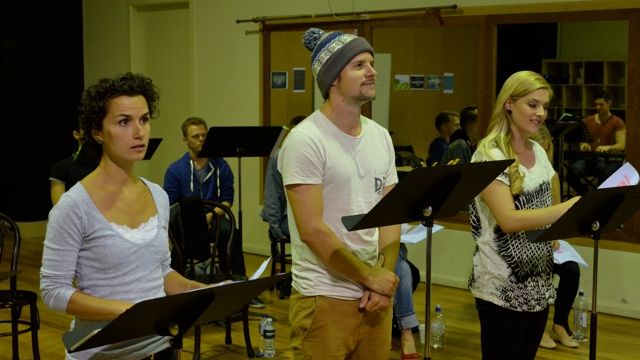 One of the greatest thrills for any theatre lover is to be there at the birth of something truly special. Last night a packed house (you couldn’t move for the extra chairs) witnessed the birth (and death) of Atlantis, a remarkable piece of work sired by the extraordinary Matthew Robinson, whose talent is, quite simply, mind-blowing. Musically, it is epic in scope with sophisticated and witty lyrics. Robinson himself says it has been described as AIDA mated with Children of Eden (Stephen Schwartz’s epic musical). The analogy is not far from the truth. But over and above that it is a musical crying out for a Broadway production, and it’s hard to imagine that this will not happen, hopefully as early as 2016.

The story of the peaceful Atlantans, whose world is rocked when a beautiful stranger Maia (Kelli Rode at her finest) arrives by boat, thus proving there are others in the world, is powerful, and the triangular love story at the heart of book is the stuff that all great musicals are made of. Theo (remarkably sung by Gareth Keegan, that most appealing of young leading men) falls instantly for the stranger, despite his long friendship with the beautiful Thalia (can Lucy Durack do anything that isn’t perfection?). With the island about to explode, who will be saved and who will be sacrificed? There are great songs in this score. Theo’s “I Will Run” seems to pay homage to Pippin’s “Corner of the Sky” and “Sun” has all the earmarks of an anthem. The wonderful Anne Wood, as Lotti, mother of Thalia and Chora (Emily Langridge) is superb giving maternal advice in “The Heart of A Man”, one of the cleverest and wittiest songs in the score. Thalia’s “Let’s Start a War” is a showstopper though, for me, without full context, it seemed like an add-on. Theo’s prayer “Are You There?” is a poignant emotional moment and “We’ll Be There” is a spiritually moving finale. With the exceptional talents of Bert LaBonte as Aeon, leader of the Moral Counsel and Theo’s father; the wonderful Melissa Langton as his wife; the always valuable Cameron McDonald as Solon (who narrates most of the story links) and Lisa-Marie Parker, Sophie Carter (who sings up a storm) and young talents Joel Parnis and Ben Nicholson, this is a dream cast in any circumstances. The amazing composer/musical director accompanied them on Grand Piano without using a score it seems, just some notation above the lyrics. We didn’t miss an orchestra one bit.

The simple staging by Director Chris Parker and lighting by Tom Willis, with sound by Marcello Lo Ricco all added to the magic. The incredible thing is that everything was achieved with just two five hour rehearsals.

Of course, any musical in development will undergo change before it hits Broadway or the West End. For me, and these are just thoughts rather than criticism, the show currently lacks a “hit” song….one that can be removed from the score and have a life of its own for generations. Les Mis has “I Dreamed A Dream”; Cats has “Memory”….every hit musical has one. Robinson has been true to classic Musical Theatre in that all the songs come directly from the action, so it’s difficult to isolate any song from the score. It’s also a very serious show, though there is wit in some songs. Thank heavens though that we’re not subjected to anachronistic comic relief! However, I would hope there are lighter and more joyful moments in the book. I’m also not sure what the purpose is of Chora’s character and couldn’t help feeling that perhaps she should sacrifice herself to the mountain in the hope of saving her people….at least give her some purpose. But whatever additions are made, the central core of music and story are far stronger than most musicals we have seen in the last two decades. Robinson is a spectacular talent, and Atlantis now has a life off its own. It is a force to be reckoned with.