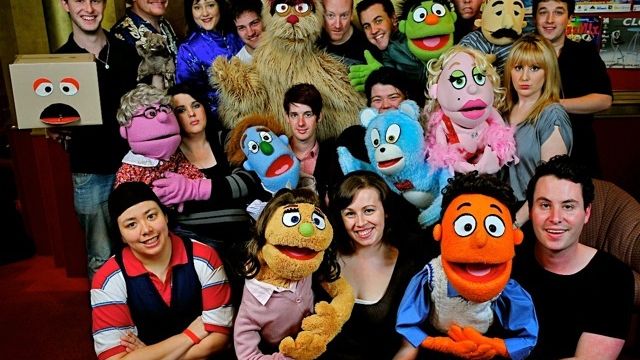 When a show’s poster features a muppet promising “It’s not for kiddies!” you expect puerile humor. What you don’t expect is a philosophical whallop.

Like an episode of Sesame Street, 25 characters – each with their own vignettes – make up the show, but it centres on two stories.

Foremost is the relationship between Princeton (David Salter), a newcomer to Avenue Q, as he searches for his life’s purpose, and the desperately dateless Kate Monster (Amy Hutchinson).

The second story tracks the falling out between Ernie-esque Nicky (Michael Williams) and his closeted roommate and best friend, Rod (Dirk Strachan), as Rod struggles to accept what everyone else on Avenue Q can plainly see.

As the actors manipulate the puppets, they add their own facial expressions. This is at first confusing – do you look at the puppets or the actors?

But the cast handle the puppets so well that sometimes you forget the actors are there. These are moments of muppet magic. 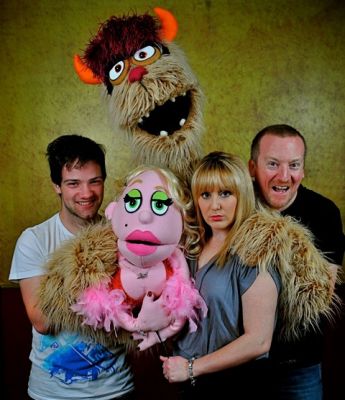 Despite the fun, there’s a serious side. The muppets you loved as children taught you that life was full of unlimited possibilities, that you were “special”. Too bad when you realise that everyone else was issued the same memo.

“For Now” captures the heart of what you should take-away.

While it’s like Sesame Street in that it teaches as it entertains, unlike the TV show, what you learn helps with life.

Matt Byrne Media’s Avenue Q is a triumph. The talented young cast deliver an outstanding production which easily rivals the professional version for quality and execution.

Avenue Q is an endearing story of love, life and finding ones purpose, cleverly told by a combination of both puppets and people. The story covers many complicated issues in a very light hearted manner, often broaching some awkward subjects, but always laughing it off.

Amy Hutchinson is delightful in her portrayal of Kate Monster, David Salter gives an impassioned performance as Princeton, Dirk Strachan is a standout both vocally and in his skilful operation of the puppet Rod and Michael Williams characterisation of Nicky is hilarious. Kym Clark as Trekkie Monster is an absolute crack up and one of the audience’s favourite characters. In the human role of Christmas Eve, Megan Humphries gave the kind of power house performance we have all come to expect. Rohan Watts gave and excellent and energetic performance as Brian, and Alisa James as Garry Coleman commanded her role and was very entertaining.

The whole cast needs to be commended on the new skill they have mastered; the operation of the amazing puppets created by Sue Dosset was first rate. The animation on the puppets faces seemed a little less flexible than those in the professional version; however the cast more than made up for this, wonderfully interpreting the feelings of the characters on their own faces.

This is a great show and a very entertaining night out in Adelaide. I would suggest you brave the cold night air and support some local theatre by checking out this gem.