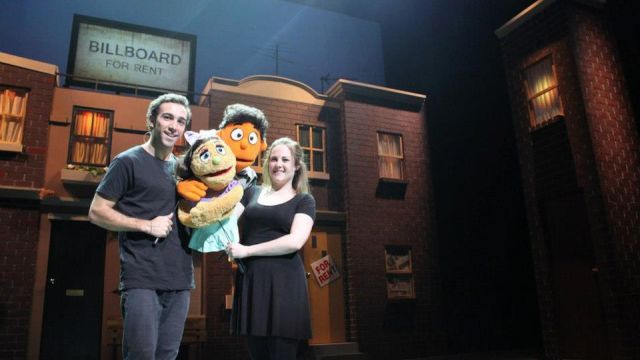 This is a show that should never have to close. It is a joyous confection of song, dance, strong story line and incisive social comment. Above all it is hugely entertaining and very, very funny.

It's hard to believe that this is only the third show that Amy Copeland has directed. She demonstrates throughout an understanding of musical theatre, its dynamics and demands, which is far beyond what her youth and experience would suggest. This was direction and choreography, in which she was assisted by Carly Hallett, of great skill and perception, brilliantly executed by a cast who clearly enjoyed sharing every sparkling moment with the audience.

For those who have yet to see it, Avenue Q is a jaded street in downtown New York where all but three of the characters living there are portrayed by puppets with visible human handlers. It's a concept that children readily accept. It says everything about this cast that they got adults to do the same thing from the moment the show opened through to the glittering finale; which is just as well because this is definitely not a show pitched at children.  Simulated sex between puppets is but one of the light-hearted features. The songs are bright, witty and frequently bawdy; the dance routines slick and zesty; the musical arrangements a joy in the hands of Cameron Zingel. From the set to the singing, from the dance to the drama, from the wonderful lighting to the extraordinary lyrics, this staging of the show by the SoPopera! company would not have been out of place in any theatre in any major city anywhere in the Western world.

What a pity, then, that this production, which so captivated its audience, should have to close.  The wonderful set, designed and built by the multi-talented Copeland family, is to be sold off. The puppets, so vividly brought to life by an exciting and vibrant cast, retired to whatever dark corner redundant puppets are relegated to. The actors returned to their day jobs, their revels ended. If you missed it, that is sadder still. Make amends by keeping an eye out for the next creation from SoPopera!, or any other one that is directed by Ms.Copeland. She is a director with vision.