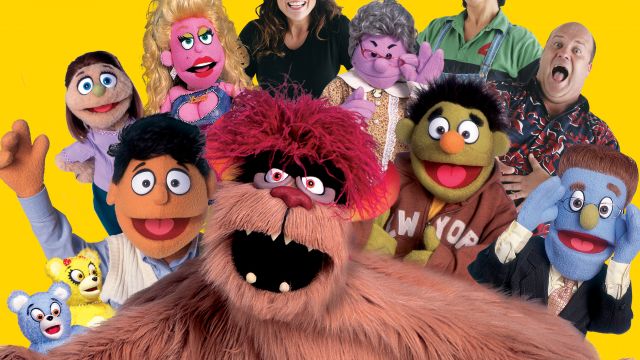 To me Avenue Q was nothing more than a name of a musical when I attended the Australian premiere on June 4, 2009. I could see pictures of Muppet type characters and it promised to be different, and “not for kids”.
It was, and very enjoyable to boot!
Each puppet was carried on stage by its operator, dressed nondescriptly so as not to distract, who would speak the dialogue and sing the songs. The confusing thing was that two characters didn’t have puppets and some operators operated more than one at different times. I’m sure there was some deep meaning to this.
Those familiar with ventriloquists will be aware of their ability to push the boundaries, as it is the puppet making outrageous statements, or being rude, not the performer. That was the premise for Avenue Q. The language was often shocking and we actually saw the puppets engaged in an all night sex session, but because they were puppets the audience was happy to accept this and laugh.
The boundaries were gently pushed on a number of occasions with songs like “If You were Gay”, “Everyone’s a little bit Racist” and “The Internet is for Porn”! By using puppets they were able to get the audience thinking without offending.
There was one simple set with apartment buildings, some of which revolved to show the inside. This was Avenue Q, one of the less salubrious streets in New York. There Princeton, the main character, came to find lodgings, his first job and his “purpose” in life.
The story is not deep, but a feel-good story, well told. I could well understand why this musical won the award for best musical score over Wicked, as the music was very accessible and I came away whistling songs I’d never heard before.
The performers, led by Mitchell Butel as Princeton, were all high energy professionals with good singing voices and the pace never dropped. Mitchell had an engaging personality and, appropriately, looked more like the bloke next door than a matinee idol. The audience readily warmed to him as he struggled to work out “What do you do with a BA in English”? It was confusing when he also popped up with another puppet as Rod, the investment banker with a secret.
More confusion was generated when Michala Banas appeared with the love interest puppet, Kate Monster, and her rival, the nightclub singer Lucy T. Slut! She was very convincing as both.
David James and Christina O’Neill played the older couple, Brian and Christmas Eve, who didn’t have puppets, and they were a fiery couple. Due to this Christina often employed a hard unpleasant edge to her voice. Cherine Peck didn’t have a puppet either as Gary Coleman, and, though a bit tall for the character, was convincing and sang very well.
My only complaint was one I wouldn’t have expected at a professional show. In more dramatic songs the voices distorted and words were lost! Hopefully they will sort this out as the season progresses.
The standing ovation at the end said it all.
Graham Ford